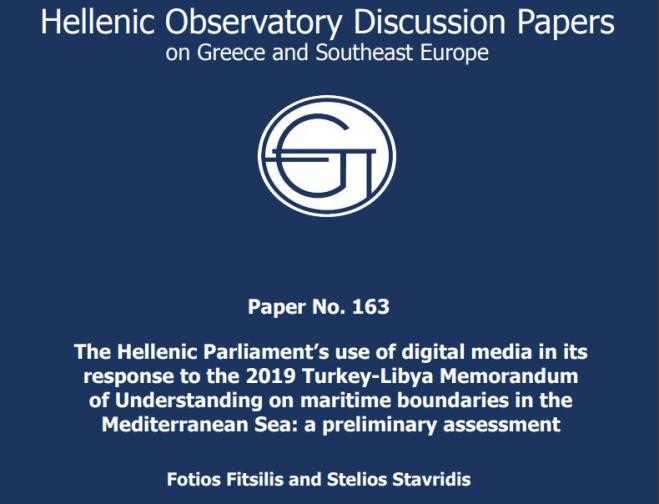 However, apart from the reaction of the Government, mainly through the Ministry of Foreign Affairs, there were also public interventions by state institutions that systematically and silently sensitized and informed a large portion of citizens, politicians and institutions, in Greece and abroad. One such institution is the Greek Parliament. In the rapidly changing international environment, digital diplomacy is playing an increasingly important role, taking its place alongside the traditional diplomacy of permanent missions, regular consultations and official announcements. When parliaments take diplomatic initiatives, there is talk of parliamentary diplomacy.

In this regard, in a recent publication of the Hellenic Observatory of the London School of Economics, one of the leading research centers on issues related to Greece and Cyprus, the digital reaction of the Greek Parliament was measured for the first time in a scientific way, for an important event, such as the Turkish-Libyan memorandum. Researchers Dr. Fotis Fitsilis (Scientific Service, Hellenic Parliament) and Dr. Stelios Stavridis (ARAID / University of Zaragoza, Spain) asked the following research question: Did the Greek Parliament make use of and to what extent the new technologies to promote the positions of the country? The time frame of the research covers the period from the end of November 2019 (time of conclusion of the agreement) until the beginning of March 2021, when the pandemic led to the cessation of the parliamentary activities.

In order to approach the issue, the digital media and the corresponding tools available to the Parliament were first examined. Its institutional response to the agreement was then analyzed. The reaction recorded takes the form of announcements or statements on the official digital media of the parliament. It is important to emphasize that, basically, individual reactions of Members of Parliament were not considered, but insteead those of official representatives and bodies of Parliament, such as the President and Vice-Presidents, Committee Chairs and delegations to international parliamentary associations and assemblies.

The results of the analysis show balanced interventions between the levels of representation, while their time distribution can be characterized as forward-looking. At the political level, the common "national line" between the government (ND) and parts of the opposition (SYRIZA and KINAL) is of interest.

The digital portal of the Greek Parliament appears as the most important channel of digital communication, with Twitter following significantly, without containing primary information. Although the Greek Parliament has a number of digital channels at its disposal, e.g. the magazine "Epi tou… Peristiliou" and the website "Global Hellenism News" with news about the Hellenism of the Diaspora, during the period under investigation, it did not seem that they were used to promote the Greek positions. The main language of the messages is Greek. However, in most cases, only the title of the press releases is translated into English and French, which demonstrates the basic communication targeting of the Greek-Cypriot axis and the Diaspora.

The publication presented a series of preliminary findings in a field that is clearly unexplored. Therefore, it can be the basic framework for further study on the content and methods of parliamentary diplomacy exercised by the Greek Parliament. In conclusion, there is considerable scope for systematizing the parliamentary response to issues important to Hellenism. A comprehensive digital communication strategy and, perhaps, a specialized Code of Conduct for Members on national issues could help in this direction.

The reported study is freely available via the link: https://www.lse.ac.uk/Hellenic-Observatory/Assets/Documents/Publications/GreeSE-Papers/GreeSE-No163.pdf