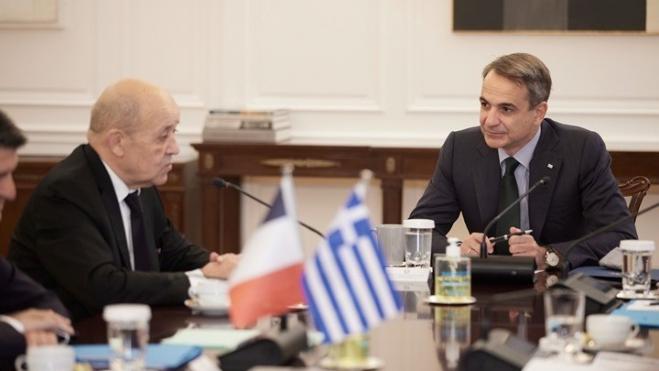 The upgraded Greek-French bilateral relations, as well as regional and international developments, dominated a meeting between Prime Minister Kyriakos Mitsotakis and French Foreign Minister Jean-Yves Le Drian at the Maximos Mansion on Friday.

During the meeting, ways to strengthen the multifaceted bilateral relations of the two sides were examined, with emphasis on the defence and economic sectors, on the basis of the Greek-French Strategic Partnership Agreement.

The French Minister is paying a visit to Greece in order to participate in a quadrilateral meeting of the foreign ministers of Greece, Egypt, Cyprus and France held in Athens.

According to government sources, Prime Minister Kyriakos Mitsotakis stressed the importance of the quadrilateral cooperation scheme, while expressing Greece's general support for the priorities set by France in view of the rotating Presidency of the Council of the European Union in the first half of 2022.

On his part, the French foreign minister stressed that this is a time when the two countries must work together on many issues that concern them, and clarified: "More specifically, I am talking about issues of security and sovereignty in the Mediterranean. This will be the subject of the quadrilateral meeting that will take place in a short time, at the initiative of my counterpart, [Greek Foreign Minister] Nikos Dendias."