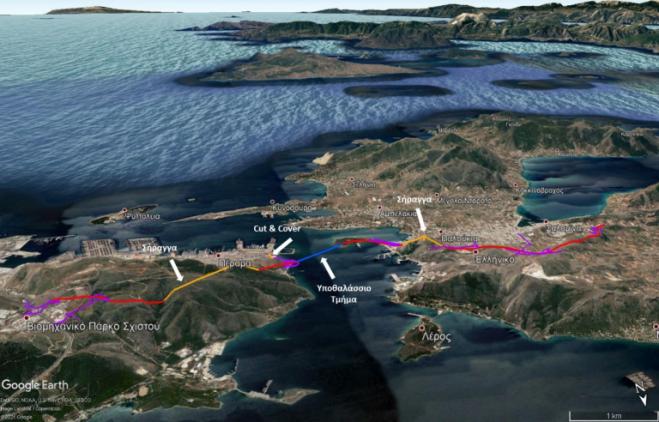 The "never-ending" work of the Submarine Link of Salamis - Perama is picking up the pace. Ten years after the start of the tender, after 12 extensions and with the process being frozen several times due to lack of design maturity, the Ministry of Infrastructure and Transport has now put on track the project that will unite Salamina with the urban complex of Attica, upgrading the development prospects of the island and the wider area. Within 2022, if there are no legal obstacles, the temporary contractor of the project will emerge, finally changing the pace in a competition that has gone through many trials and tribulations.

The submission of the Environmental Impact Assessment (EIA) to the Ministry of Environment and Energy, last March, paved the way for the project to return to normal, with an estimated budget of 400-450 million euros. A milestone is the approval of the environmental conditions, while at this time the tender documents are already being prepared. It is estimated that the environmental approval will be given in the spring and the summer will be followed by the submission of binding offers.

It is recalled that during the phase of the competitive dialogue, which is coming to an end, the three participants, Mytilineos, GEK TERNA, VINCI Concessions- VINCI Highways-AKTOR Concessions, each submitted their own proposal for the construction of a permanent road link of the island with Perama. The committee responsible came up with a proposal for the synthesis of these three solutions. In this context, a technical consultant assisted, who suggested further modification and optimization of the resulting layout.

The project, which is particularly technically complex, is divided into three sections. First, the road section connecting Perama with Schistos Avenue, in order to bypass the Municipality of Perama, approximately 4.5 km long with a 1.7 km tunnel. This route starts from the existing Schistos - Skaramagsa Avenue, with which it is connected by a junction and runs inside the area of ​​the Skaramagas Naval Fortress and up to the area of ​​Perama.

The value of the link for West Attica

The project "Design, Construction, Financing, Operation, Maintenance and Exploitation of the project of the Permanent Underwater Road Link of the island of Salamina with Perama, Prefecture of Piraeus", which will be constructed through a concession contract, will have a construction period of 5 years. It is expected to contribute to the development of the areas it will connect by improving accessibility and increasing road safety.

Today, the ferry line "Paloukia - Perama" is the main connection of Salamis with Attica. It is one of the busiest ferry lines with a continuous flow of more than 250,000 passengers, 72,000 private vehicles, 40,000 two-wheelers and 3,000 trucks per month, with a significant increase during the summer months.

As the Deputy Minister of Infrastructure, Mr. George Karagiannis, has stated, "The Salamis Link is a dilapidated project, which was originally designed in the '90s, redesigned in 2012 and has been glued ever since. This project is extremely important, because it will upgrade the whole of Western Attica and especially, the wider area of ​​Perama, but also of Salamina. On the one hand it will decongest to a great extent Perama and on the other hand will upgrade the island of Salamis itself, and the movements of thousands of citizens will become much easier and cheaper ".

The project will also upgrade the services offered, both in Salamis and in the Naval Station, in relation to the existing ferry connections. Continuous traffic to and from the island 24 hours a day will be possible, minimizing the travel time, without delays and waiting for the ferry. In addition, both during construction and later during the concession, employment will be significantly enhanced, as human resource requirements will be met by locals.

As far as environmental protection issues are concerned, the project has largely incorporated the environmental dimension in its design, so that the road is compatible with the concept of sustainable development. A number of technical projects have been adopted for the effective protection of fauna and flora. With tunnels and bridges, the main communication corridors are left free and the passages through the natural areas of the area are avoided where possible. The contractor will implement an Environmental Monitoring and Control Program, which will include monitoring of noise, air pollution and water quality.