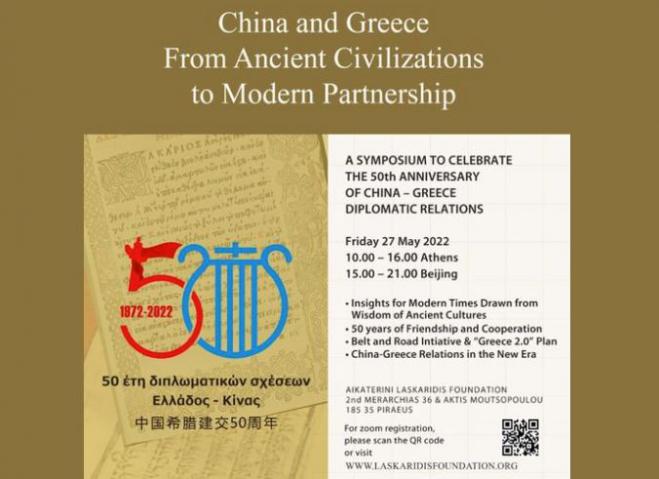 The Aikaterini Laskaridis Foundation, in the context of the Center for China Studies, organizes on Friday 27 May 2022 the Symposium “China and Greece: From Ancient Civilizations to Modern Partnership”.
The Symposium is held on the occasion of the celebration of 50 years of full diplomatic relations between China and Greece, which were established in 1972.
The event will be attended by prominent personalities of politics, diplomacy and science from the two countries, sealing with their presence the link that connects two cultures with unique history for building modern prosperity.
The Minister of Development and Investments Mr. Adonis Georgiadis, the Deputy Minister for Economic Diplomacy and Openness Mr. Kostas Fragogiannisand and Mr. George Iliopoulos, Ambassador of Greece to China will address a speech. On behalf of the People’s Republic of China, the event will be welcomed by Mr. Xiao Junzheng, Ambassador of China to Greece, as well as Mr. Zhao Qi, Secretary General of the Chinese Academy of Social Sciences.
Keynote speakers of the event are Mr. Feng Zhongping, Director of the Institute of European Studies, CASS and President of China-CEEC Think Tanks Network and Mr. Loukas Tsoukalis, Professor Emeritus at the University of Athens, Professor at the Paris School of International Affairs (Sciences Po) and President of Hellenic Foundation for European and Foreign Policy (ELIAMEP).
Tagged under