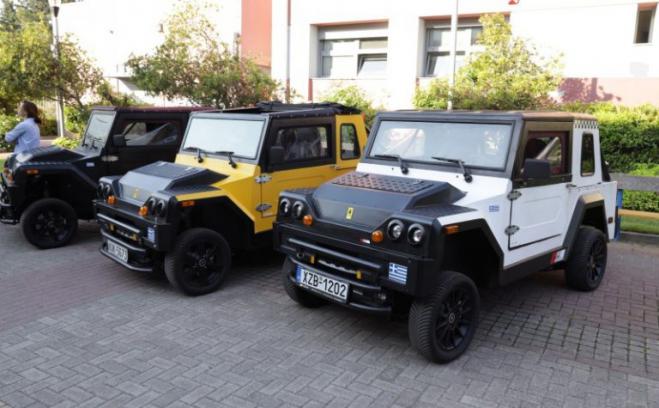 The history of "Greek cars" is old and bitter , as despite the remarkable efforts for the construction and production of a simple, cheap and practical vehicle in the country, the result has not been what one would expect. But things may be looking up.

The biggest obstacle in trying to build a purely Greek passenger car was securing approval from the state and for this reason most of the efforts fell by the wayside. Production costs, the small size of the Greek market and the inability to compete with foreign automakers, compiled the causes for this failure.

However, there's light at the end of the tunnel, and its from the "KERABOSS SUPER K", which in 2016 -according to the company- was the first Greek car to receive state approval. Six years later, just yesterday, the first two cars got license plates, in a special event held at the Transport Directorate of the Attica Region.

The first step for the development of the project was made with the decision (Government Gazette B '3134/2014), which created for the first time the regulatory framework which defined the procedures and technical requirements for the approval of the circulation of Individual Vehicles of Special Construction (M. Ο.Ι.Κ.).

In 2016, the first application was submitted by "KERABOS CARS MANUFACTURING IKE" for the issuance of an individual approval of a passenger vehicle of category M1 and finally, in 2021, the duties and fees were determined by the Customs Administration of the Ministry of Finance. After the upgrade of the Computer System of the Ministry of Transport, this year, the necessary adjustments were made and the first marketing licenses were issued.

According to the company, in 2010 Pavlos Kerabos, project creator, developer and car manufacturer, designed together with his wife Stella Kerabos, his latest achievement, the "KERABOSS SUPER K", which -as he mentions- is new car and not just "one more car".

"This was the dominant criterion for the conception and implementation of the car. To be unique, to stand out from all other cars and in this way to make the driver / owner unique and special. Its special appearance, the pleasure of driving and its top torsional rigidity, challenge you to get it. In addition, its military design is timeless, making it permanently up to date ", it is emphasized on the company's site.

It is noted that "KERABOSS CARS MANUFACTURING" has already built three units, with two being originals and the third intended for a customer who has ordered it. According to company executives, the time for the construction of a new car is estimated at 4-5 months, while its price amounts to 22,000 euros + VAT.

The "KERABOSS SUPER K" is offered in 2 and 4 seater versions and is considered a suitable vehicle for the islands and rent a car companies.