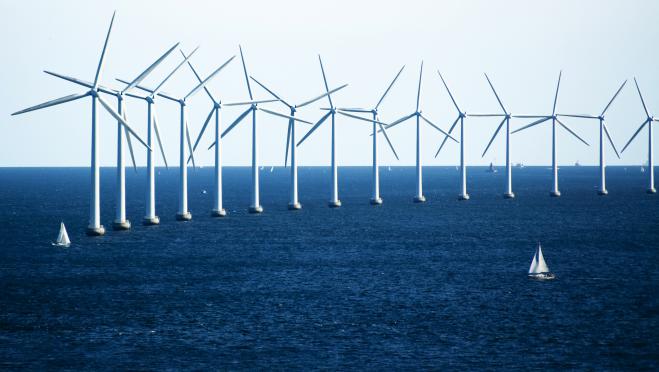 German multinational giant RWE group, which is active in RES, announced yesterday that together with Hellenic Petroleum it will establish a joint venture (through their subsidiaries RWE Renewables and H EL.PE Renewables) for offshore wind farm projects.

The two firms will control the joint company and the aim is, according to sources, to aggressively claim licenses from the projects with a total capacity of at least 2 gigawatts (GW) that the Greek government wants to develop by 2030. This concerns both fixed-site and floating wind farms.

Market estimates see the amount of investment for the 2 GW to be around 6 billion euros. The Ocean Winds (Portuguese EDP Renewables and French Engie) joint venture with Greek TERNA ENERGY, which want to develop 1.5 GW offshore wind farms, have also entered the race for the offshore wind farm market. The three companies were the first to express their investment interest.

The partnership of the Abu Dhabi Future Energy Company (Masdar) with Motor Oil, as well as the Kopelouzos group with RF Energy, with the latter wanting to develop 850 MW offshore wind turbines, is also locked.

About a year ago, Mytilineos announced a similar agreement with the Danish Copenhagen Offshore Partners. Parkwind's partnership with Intracat has also recently become known.

PPC is also reportedly in talks with a foreign investor, with some information talking about Total Eren. The parent company Total Energies, after withdrawing from hydrocarbon research in Crete, announced the activity of its subsidiary in offshore wind farms.

From time to time, publications bring other large international groups with many marine Gigawatts in their portfolio as interested parties, such as the Norwegian Equinor, Iberdrola, Enel and also Macquarie.

Greece has a second chance to exploit the rich wind potential in the Greek seas with the first one 12 years ago having fallen by the wayside.

Especially in the current phase where REPowerEU favors the development of RES in order to divest Europe from Russian fossil fuels but also with the offshore wind farms offering a value multiplier for the Greek economy as important jobs open for the Greek shipyards and the domestic heavy industry open up. This means investment interest must be kept alive.

The first opportunity arose in 2010 and as the president of TERNA ENERGY, Mr. Giorgos Peristeris, recently recalled: "And while significant private investments in offshore wind farms had been launched by Greek and international investors, which would have multiplied benefits for the Greek economy and the Greek industry, with an incomprehensible decision the then government froze all activity in the sector. Today, 12 years later, we’re still in the same place. And we are still looking to find the best solution, at the expense of what can be immediately implemented and bring development and immediate financial benefits", he said, referring to the bill being prepared by the government that will determine the conditions for the concession of research, the criteria for the participation of investors and the organizations that will run the relevant competitions in the Greek seas.

The nebulous bill and the bureaucratic hydra

According to what has come to light so far, the bill that the government has been preparing for over a year and a half is going to go out for public consultation soon.

However, the provisions on the one hand do not provide for investors who have been in possession of licenses for 12 years and on the other hand it refers critical issues to a multitude of ministerial decisions and commissions.

The operator is expected to be EDEY (Hellenic Hydrocarbon Management Company) which will be renamed. It will draw up the wind farm development program and prepare the Presidential Decrees concerning the designated areas and will announce the first round of applications for research permits. No later than two years after the tender for the permits, the wind farm installation areas will be put up for public consultation.

With one more decision, the tenders that RAE (Regulatory Authority for Energy) will undertake for the compensation price of the wind farms will be determined.

Market players believe that if and as long as these provisions are in force, the institutional framework risks developing into a conundrum for investments and into a labyrinthine network of bureaucratic tangles.