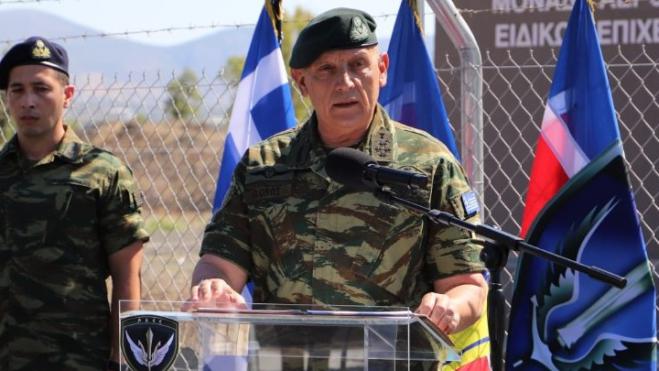 The Chief of the Hellenic Armed Forces General Staff, General Konstantinos Floros is on an official visit to the USA where his meetings will include Pentagon staff, officials of the State Department, members of the Greek-American community and representatives of International Relations Institutes.

The Chief’s program kicked off in Washington, where met with the ambassador of Greece in Washington, Alexandra Papadopoulou, with whom they discussed issues of mutual interest, placing special emphasis on the bilateral relations between Greece and the USA. Afterwards, he visited the Military Mission of the Embassy and met with the staff serving in it, whom he congratulated for their efforts and efficiency.

Gen. Floros then sauntered off to the Pentagon where he met with the Chief of the US Army General Staff, General James McConville. The two sides discussed defense and security issues in relation to the Ukraine, the Aegean and the Eastern Mediterranean, as well as the deepening of Greece-US Military Cooperation both at the Armed Forces level and more broadly within the framework of the ratified Mutual Defense Cooperation Agreement (MDCA).

The rest of Monday's program was mainly devoted to contacts with expatriate organizations, as General Floros met with the supreme president of the AHEPA organization, Jimmy Kokotas, and the executive director, Vassilis Mosaidis, whom he congratulated for promoting Greek-American relations and Greek principles and values.

Afterward he met with the representatives of the OXI Day Foundation, Andy and Mike Manatos, with whom he discussed the activities of the Foundation and their future outlook. In addition, the head of GEETHA visited the headquarters of the American Hellenic Institute (AHI), where he had the opportunity to exchange views with the president Nick Laryngakis and the members of the Board of Directors regarding issues of defense cooperation between Greece and the USA, as well as regarding the actions of the Institute and the ways of their support by GEETHA.

Finally, Gen. Floros met with the president and representatives of the Jewish Institute for National Security of America (JINSA) think tank, with whom he discussed issues related to the defense and security of the Euro-Atlantic area, the Eastern Mediterranean and the Middle East.