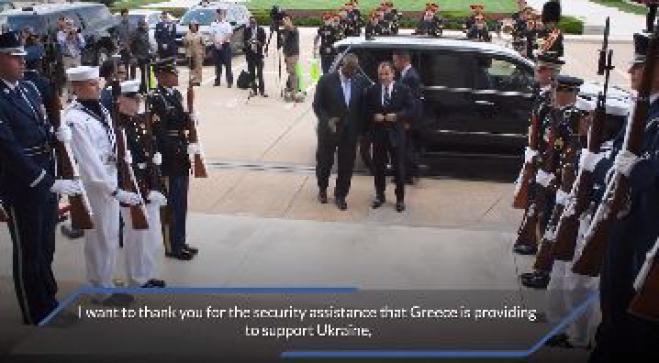 The meeting held at the Pentagon between the Secretary of Defense of the United States, Lloyd Austin, and his Greek counterpart, Nikos Panagiotopoulos sent a wave of messages to those eyeing discord and tension in the East Med.

The two sides reiterated that relations between them are excellent, while they sent a common message to Turkey in order to reduce provocation in the Eastern Mediterranean.

Austin and Panagiotopoulos talked about US-Greece military cooperation, as well as the developing defense partnership between the two countries for collective defense.

The American Minister of Defense thanked Mr. Panagiotopoulos "for Greece's substantial support to Ukraine to defend itself against Russia's brutal and unprovoked invasion", while he expressed his appreciation for Greece's hospitality at the American bases in Souda as well as at other Greek cities.

At the same time, he underlined the importance of the port of Alexandroupolis, which is now a hub for the transfer of US forces and equipment to and through NATO's Eastern Wing.

The Mediterranean and Turkish provocation

Turkey's ongoing provocations in the Aegean and the eastern Mediterranean were also on the table, with the American defense minister pledging to have a telephone conversation with his Turkish counterpart, Hulusi Akar, with the aim of reducing tension in the region.

Finally, the Defense Secretary thanked Greece for the fact that it increased its defense spending, above the limit of 2% of GDP as requested by NATO.