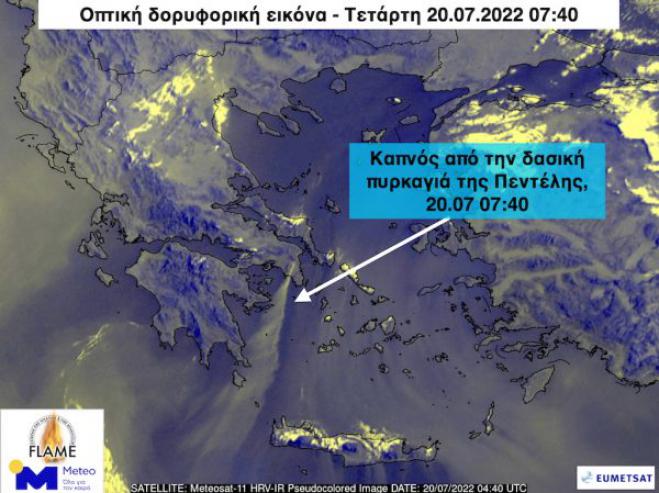 The fire department is dealing with scattered outbreaks and active fronts in Dionis, Gerakas, Pallini and Anthousa.

As reported by the press representative of the Fire Department, deputy fire chief Ioannis Artopios from the National Coordination Center for Operations and Crisis Management in Marousi, emphasis is placed on the fronts that are on the south-west side of the fire, on the borders with Attiki Street, near the Athens Transit Bus facility  and south-east, also on the border with Attiki street, near the facilities of VIANEX pharma.

"At the same time, great efforts are being made to protect the entire urban fabric that is within the perimeter of the fire," added Mr. Artopios.

All forces into the fray

A total of 485 firefighters are operating, with 28 groups of detachment on foot and 120 vehicles, while the Romanian firefighters also remain in the field.

At the same time, the mobile operational center "OLYMPOS" has been made available for the coordination of forces, while the real-time mapping of the fire is constantly available from drones deployed by the Fire Brigade.

Aerial firefighting means, already operating, include 5 aircraft and 4 helicopters, one of which is for aerial coordination, while another 4 aircraft and 3 helicopters have been mobilized.

Also, the assistance of numerous officers of the Hellenic Armed Forces General Staff, the Forestry Service, EKAV ambulances, local agencies and police, which has 626 police officers with 232 vehicles, mainly to facilitate the safe movement of citizens, their removal to a safe place, and the safeguarding of their property.

The Prime Minister at the Crisis Management Center

The meetings at the Crisis Management Center are continuous, the Minister of Climate Crisis and Civil Protection, Christos Stylianidis and the entire leadership of the ministry, are in constant communication with the Ministries of Health, Interior and Citizen Protection.

Prime Minister Kyriakos Mitsotakis was also at the scene early in the morning, participating in a meeting with officials managing the blaze.

An 84-year-old man decided to end his life after seeing his house, in Penteli, destroyed by the fire.

According to information, the body of the unfortunate man was found in the morning by the police forces who were in the area, while an EKAV ambulance is also at the scene to retrieve his body.

Winds in the next few hours

The meteorological conditions are not conducive for optimism, with the director of national weather service EMY, Theodoros Kolidas, mentioning in his post that the winds will continue to be strong.

Specifically, the director of the National Weather Service reports on Twitter: "The average intensity of the winds at night may not exceed 5 to 6 Beaufort, however wind gusts will reach 7-8 Beaufort. In other words, the conditions will continue to be difficult in the evening, while before dawn they will strengthen."

Penteli: The smoke traveled up to 400 kilometers away

The fire that has been burning since Tuesday afternoon in the wider area of ​​Penteli has already caused incalculable damage while it continues to burn with undiminished intensity.

A satellite image released by the Meteo site of the National Observatory shows the smoke reaching Kythera and approaching Crete.

Specifically, an optical satellite image received and processed by the National Observatory of Athens/meteo.gr from the European satellite METEOSAT-11 shows the smoke of the Penteli forest fire to have been carried by the strong north and north-east winds at least 400 kilometers south-southwest towards the sea of ​​Kythira and the Southwest Cretan Sea on Wednesday morning (20.07.2022 07:40).

It is noted that earlier meteo announced that winds of 7 Beaufort have been blowing in the area of ​​Penteli since the morning with gusts exceeding 100 km/h.

Until Wednesday morning, the active fronts of the fire can be found in Gerakas, Anthousa, Pallini, Dioni as well as on Marathonos Avenue.