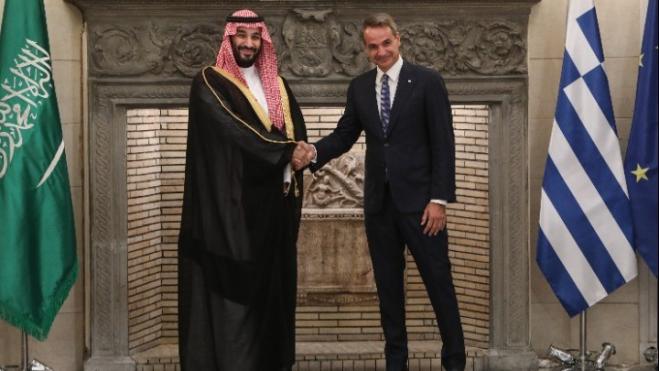 A bundle of bilateral agreements valued at a moderate four billion euros were signed on Wednesday in Athens on the second and last day of a high-profile official visit by Saudi Arabia Crown Prince Mohammed bin Salman.

The agreements, essentially billed as a “precursor” by the Saudi side, mainly deal with the construction of an undersea telecoms cable (the East to Med data Corridor), as well as cooperation in air and sea transports, aquaculture, waste management and other sectors.

Energy-related agreements are valued at 2.6 billion euros, involving both conventional and renewable sources of energy.

At the same time, bilateral cooperation is eyed in the agri-industrial sector, construction and even defense technology.

Prince Salman’s very prominent visit to Athens – his first to Europe since the pandemic – came at the head of a business delegation of 59 corporate representatives active in all facets of the kingdom’s economy.

According to reports, 234 business-to-business (B2B) meetings were held with Greece-based company executives.