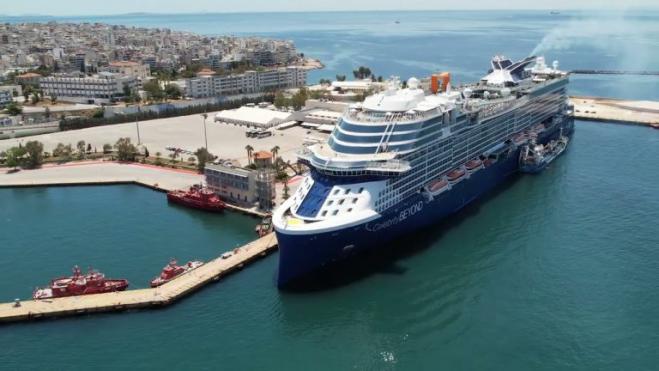 The Celebrity Beyond cruise ship arrived in Piraeus on Wednesday morning. The ship is 327 meters long and 39 meters wide, has 21 decks, and can carry 1,416 crew members and up to 3,937 passengers.

Celebrity Cruises' newest ship is captained by Kate McCue, who was one of the first women and the first American woman to head a cruise ship.

This is the third ship of the Edge class, which was built a few months ago in the French shipyards Chantiers De L'Atlantique, while its maiden voyage to the Mediterranean began last April. Celebrity Beyond is slightly larger than her sister ships, Edge & Apex. The company has ordered two more ships of the same class from the French shipyards, the Celebrity Ascent to be delivered in November 2023 and the fifth and last of the class in 2025.

Kate McCue (born January 6, 1978) is an American cruise ship captain, currently employed by Celebrity Cruises. She is currently the captain of the Celebrity Beyond.

When she became the commanding officer of Celebrity Summit in 2015, it was the first time that an American woman had been named captain of a "Mega" cruise ship. Prior to her time at Celebrity, she had worked as an officer for both Disney Cruise Lines and Royal Caribbean.