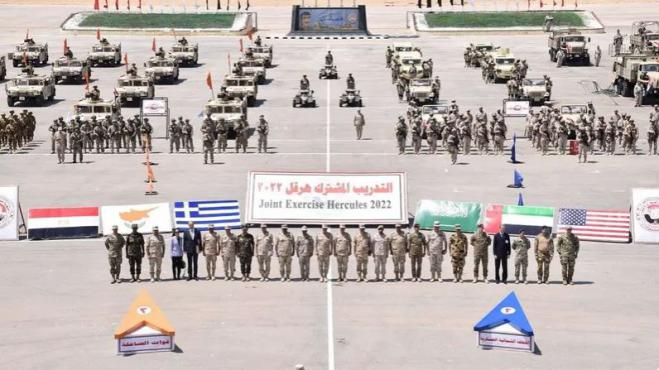 The Hercules-2 joint military training kicked off in Egypt with the participation of special units from the Royal Saudi Land Forces, the UAE, Greece and Cyprus, the Egyptian Ministry of Defense said in a statement Sunday.
The training, which is set to last for several days, started at the Mohamed Naguib Military Base in the Marsa Matrouh governorate and is expected to expand to military exercises areas in the northern military district, the statement said.
It added that Jordan, the US, Democratic Republic of Congo and Bahrain have participated in the exercises as observers.
Head of the Armed Forces Training Authority Major General Khaled Ahmed Shawky expressed his appreciation for all the countries participating in the drill..
Shawky, according to the statement, noted that the training “was important in order to elevate combat capabilities and unify the vision in order to face common challenges.”
The first phase of the training included the integration and the acquaintance of the participating forces to unify the conceptions. It also included an exhibition during which the weapons and equipment that will be used during the training is displayed.
“This in addition to holding several lectures in the fields of cybersecurity and international humanitarian law,” the defense ministry said.
Hercules-21 was held in September 2021 in Greece with the participation of forces from Egypt, Saudi Arabia, Greece and the UAE.
Tagged under