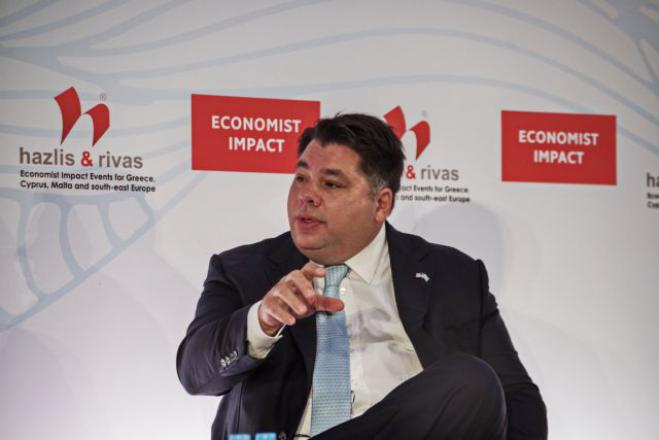 The US ambassador, George Tsunis, spoke about the relations between Greece and the USA and the importance of investments in the country from the stage of the conference "The Second Thessaloniki Metropolitan Summit", organized by the Economist and powergame.gr.

Praising Greece and the resilience it showed during the years of crisis, he said "I remember when Greece was going through a period of crisis, a very painful period for me, and how exactly it came close to leaving the Eurozone, but it showed resilience. It had 27% unemployment and still managed to turn the situation around."

Regarding the importance of relations between Greece and the USA, he added: "When the USA wanted to create a government, they had adopted the democratic principles of Greece and were trying to be inspired. Patrick Henry had said "Give me liberty or give me death". We share many common democratic values, I have always said that Greece has been a reliable ally that you can count on. We have an obligation to protect the Republic. Do we want a democracy or an authoritarian regime? Can we consider it acceptable that countries invade other countries and cause all this crisis? Civilians die, Russians bomb hospitals. There are a number of challenges in Europe and Biden is doing a great job of working with Europe.

"The US controls 60% of the LNG here, Greece is a pioneer and has a reputation in renewable energy, so it will not back down, it will help Ukraine and defend human dignity.

Regarding business investments in the country and citing the examples of Pfizer, Cisco and Deloitte, he said: "Take advantage of the business potential, work with Mr. Adonis Georgiadis to create jobs and growth."

Referring to the war in Ukraine, he emphasized that the war had secondary effects such as inflation and the energy crisis.

"The challenges ahead of winter will be huge, huge spike in prices, huge food shortages" he warned and continued: "Today it's Ukraine, tomorrow it could be another country, even Greece, so we should support each other. The US cannot remain silent, it should engage in cooperation with partners, and Greece is one of the US's partners. As an ambassador, I am proud of what President Biden is doing and of the relationship between the two countries."