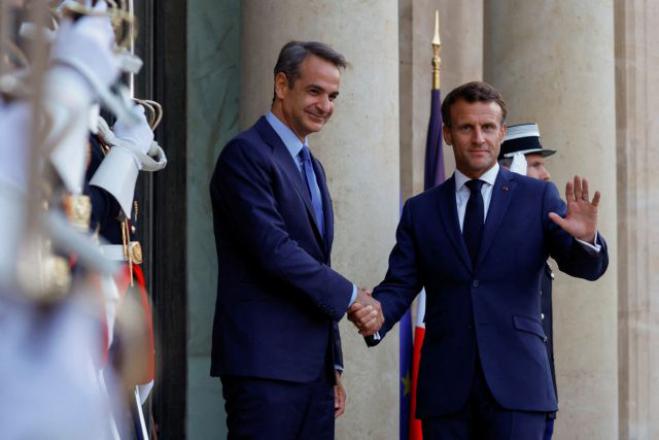 French President Emmanuel Macron welcomed Greek Prime Minister Kyriakos Mitsotakis on Monday afternoon at the Élysée Palace in Paris, with the latter initially and explicitly citing what he called increasing Turkish provocations and belligerence, in statements before reporters.

“I will share with President Macron some thoughts on increasing Turkish provocations in the Aegean and the eastern Mediterranean. I thank President Macron for his clear support for my country. We respond to challenges with readiness, and to those who threaten us – and who say that they will descend on our islands suddenly one night – we say we’re waiting for them in the light of day, where it will be visible who has international law on their side.”

At the same time, Mitsotakis underlined that Greece is both a force of deterrence and a force of cooperation.

“… if I were to summarize Greek-French cooperation in just a few words, I would say: We are stronger together.”

He also reminded of the signing of the multi-level bilateral strategic partnership agreement last year, noting that it boosts the EU’s strategic autonomy.

Beyond the latest round of saber-rattling and revanchist rhetoric emanating from official Ankara, Mitsotakis said Athens and Paris are working to find a European solution to the problem of rising energy prices. He again reiterated a proposal by his government to place a price cap on natural gas rates, as well as decoupling electricity rates from natural gas prices.

On his part, the French leader expressed satisfaction with Franco-Greek cooperation in defense and security, while also terming language and provocations against Greece’s territorial integrity as “unacceptable.”

Macron again pointed to Paris’ full support for Greece, “…cooperation between the two countries is long-standing, and looks far into the future.”

He expressed his administration’s appreciation to Greece for its assistance in dealing with a spate of unprecedented wildfires that plagued France over the summer. .

In concluding, Macron cited a significant convergence of views with Mitsotakis on energy-related issues and the economic crisis, issues that will be discussed in detail during the working dinner.