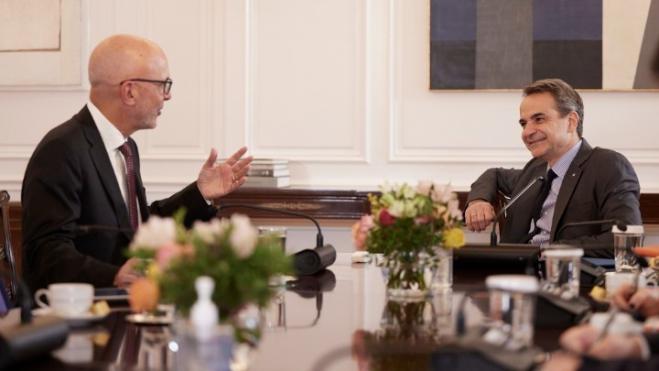 Prime Minister Kyriakos Mitsotakis on Thursday pointed out the significance of Greek-Israeli relations, which have now acquired the character of a strategic cooperation, in his meeting with the new executive director of the organisation "American Jewish Committee" Ted Deutch, at the Maximos mansion.

Mitsotakis also underlined the excellent level of Greek-US relations and, according to government sources, presented to Deutch in detail the initiatives that Greece has taken and the infrastructure it is developing, especially the FSRU in Alexandroupolis, in order to turn this into an energy hub for the wider region, which will contribute to stability, Europe's energy security and end dependence on the Russian fossil fuels.

According to the same sources, their meeting was also the first contact between the new AJC executive director and a foreign leader since Deutch assumed his duties.