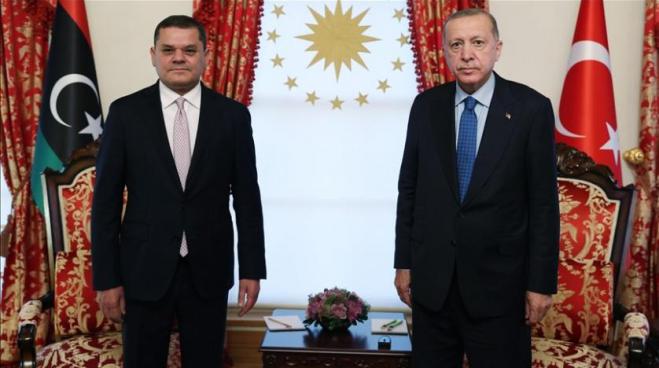 Ankara appears upset after being "slapped in the face" by an administrative court of Libya which "froze" the agreement with Turkey on hydrocarbons.

It is recalled that the Tripoli Administrative Court ruled in favor of the suspension of the bilateral agreement on the exploitation of hydrocarbons and natural gas that Turkey and Libya had co-signed on October 3, 2022, as the signing of such a decision, as it stated, cannot be done by the temporary African country's government.

"The interim government is prohibited from signing in any way agreements under the sovereignty of the Libyan state, over its land, sea and air territory, as well as agreements on the demarcation of borders or the exploitation of natural strategic resources, unless approved by the General National Congress", said the Libyan court in its decision, thus putting a spin on the Turkish-Libyan memorandum.

Ankara, after the latest developments with the court's decision, is "seething".

As the Turkish Foreign Minister Mevlüt Çavuşoğlu reported, as soon as the decision to suspend the implementation of the Turkish-Libyan memorandum on hydrocarbons became known, he contacted the Dbeiba government, receiving - as he stated - assurances that it supports the agreement.

The head of Turkish diplomacy attempted to downplay the court's decision, stressing that "the court decided to suspend the execution. Ultimately, it's a decision. It's not the final decision."

Asked about the Tripoli court decision, he said that "of course, we immediately contacted the head of the Tripoli government, Abdul Hamid Dbeiba."

“We signed this agreement on the sidelines of our visit on October 3. The text is a rendering. Memorandum of cooperation. These don't need to go through parliament anyway in Libya. Just like the cooperation memoranda signed by Libya with other countries" noted the Turkish Foreign Minister.

He also emphasized that "the court decided to suspend the execution. Ultimately, it's a decision. It is not the final decision. The government supports the deal and is doing the necessary work and we should take this seriously…. After all, this cooperation agreement is extremely important for them as the government and state of Libya. They said they support her and will monitor it closely."

The Greek Minister of Foreign Affairs, Nikos Dendias, also made statements on the matter, who commented on the Turkish reaction after the decision - deadlock by the Tripoli court.

Specifically, when asked to comment on a statement by the Turkish Foreign Minister, Mevlut Cavusoglu, that he contacted the head of the government of Tripoli, Abdul Hamid Dbeiba, regarding the decision of the Tripoli court, he said the following:

"First of all, I would keep a very small basket in what comes from the Turkish side as information. Beyond that, however, a general position would be that a temporary government, I think, cannot comment on decisions of the Court.

This is at least the case in all advanced countries. And, in fact, in a case which is also judged by a Higher Court".

What does the court's decision mean?

The court's decision on the agreement that the pro-Turkish government in Tripoli rushed to sign, despite not having such an option being transitional in nature, now has significant implications for maritime demarcation and security cooperation agreements.

The decision, it is noted, is based on legislation of the General National Congress that has been in force since 2013 and specifically states that: "The interim government is prohibited from signing in any way agreements under the sovereignty of the Libyan state, on land, sea and air of its territory, as well as agreements for the demarcation of borders or the exploitation of strategic natural resources, unless approved by the General National Congress".

It is recalled that the Turkish-Libyan memorandum has been condemned internationally, while a representative of the State Department had declared that the government of Tripoli must, based on the commitments it has undertaken, not sign new agreements that disrupt the country's foreign relations or entail long-term obligations for Libya.