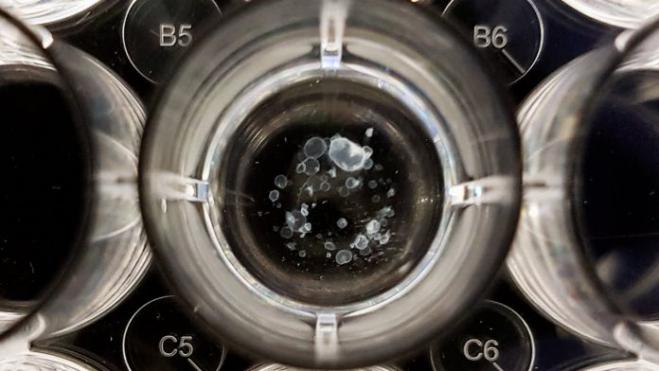 Scientists at the University of Cambridge in Britain, led by a Greek diaspora scientist, have created a laboratory bile duct that can be used to repair liver damage. It is the first time that such an instrument (mini-laboratory instrument), which has been created in the field of regenerative medicine, is used in practice in human organs.

The researchers, led by Dr. Fotis Sampaziotis of the Cambridge Medical School and the Wellcome-MRC Cambridge Stem Cell Institute, who published the paper in Science, hope their research paves the way for new cell therapies. liver diseases, as such laboratory organs in the future will replace dysfunctional parts of the body and restore normal liver function or repair the liver from donors, so that it is now suitable for transplantation.

Bile is produced in the liver and transported to the small intestine through a network of bile ducts, formed by epithelial bile cells. Although vital for digestion, bile becomes toxic when it accumulates in the liver, resulting in chronic liver disease, which can lead to liver failure, which makes transplantation inevitable. Dysfunctional bile ducts are behind about one-third of adult liver transplants and 70% of those in children, as there are no alternative treatments. But there is a lack of donors and transplants available, so few patients can get a transplant on time.

The researchers developed a new approach and showed for the first time that it is possible to transplant organoids from bile cells grown in the laboratory into damaged human liver and restore its function. In this context, they restored livers that were considered unsuitable for transplantation due to bile duct damage.

Dr. Sampaziotis said that "due to the chronic shortage of donor organs, it is important to find ways to repair damaged organs or even provide alternatives to organ transplantation. We have been using organoids in small animals for several years to understand their biology and regenerative capacity, but we have always hoped to be able to use them to repair damaged human tissue. "Our study is the first to show that, in principle, this is possible."

F. Sampaziotis is a graduate of the Medical School of the University of Athens, with a PhD in stem cell biology from the University of Cambridge, and is considered a pioneer in the creation of bile ducts and bile in the laboratory. Professor Ludovic Valier of the same institute said: "This is the first time we have been able to show how a human liver can be improved or repaired using laboratory-cultured cells. "We have further work to do to test the safety and viability of this approach, but we hope to be able to transfer it to clinical practice in the coming years."