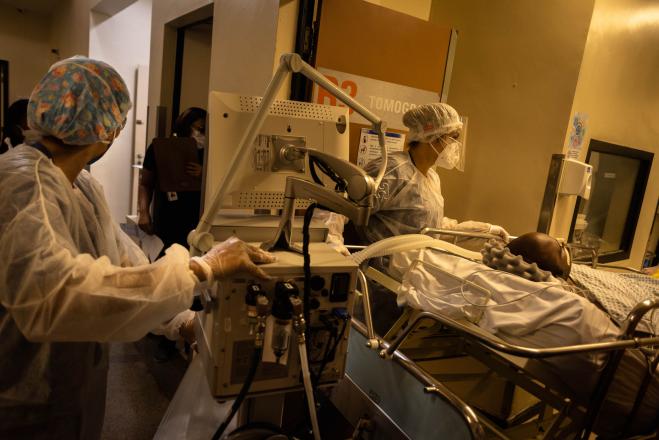 About 20,000 deaths from complications of Covid-19 were prevented by vaccination against the coronavirus infection, according to a new pre-published study by professors Sotiris Tsiodras and Theodoros Lytras, conducted during the period 11 January 2020 - 8 December 2021.

The study showed that the effectiveness of vaccines against severe disease and death is high and similar at all ages, with slightly lower in people over 80, while declining over time. However, the amount of damage is very small, as the effectiveness remains greater than 80% at 6 months from the 2nd dose and returns close to 100% with the 3rd dose.

"Vaccination reduces the risk of death from COVID19 so" dramatically "that by December 8 we estimate that it has prevented 19,691 deaths !! (95% CI 18,890-20,788). That is, we would expect so many "extra" deaths if we did not have the vaccination. In simple words, this emerges by comparing the age mortality of vaccinated and unvaccinated persons, and applying the latter to the entire population, "says Professor Theodoros Lytras in a post.

According to him, the study demonstrates the enormous protection offered by all vaccines and their ability to save numerous lives.

As he points out, there are unfortunately many vaccinated people who become seriously ill and die, but: (a) they are numerically much less (see table below) (b) the denominator (total number of vaccinated at follow-up) is much smaller increase vaccination coverage). (c) there is a severe confusing error due to age, as those vaccinated have a higher average age than those who have not been vaccinated.

"(B) + (c) means that the simple numerical comparisons (vaccinated / unvaccinated who died / intubated), which are very fashionable, seriously underestimate the effectiveness of vaccines. In other words, those who have been vaccinated have an even lower risk than those who imply such comparisons ", explains Mr. Lytras.

He emphasizes that the vaccine is by far our most powerful weapon against the pandemic, noting, however, that a second line of defense is needed, the health system.

The diagram below shows how much the observed and expected mortality curves diverge as the vaccination coverage of the population increases:

The effectiveness of all vaccines is similar

The results of the study showed that the two vaccine doses offered more than 90% protection against intubation and death in all age groups, with marginally lower protection in people 80 years and older. The anti-death efficacy was similar for both the Delta variant and the previously released variants (excluding the Omicron period), and slightly higher than intubation from the Delta variant.

However, the efficacy of 2 doses decreased slightly over time, while it was still over 80% at 6 months and the 3rd dose of the vaccine promoted it close to 100%, even in the older age group. The efficacy of a single dose, although significantly lower, was sufficient to halve the risk of intubation and death compared to unvaccinated persons.

The BNT162b2, mRNA-1273 and ChAdOx1 nCoV-19 vaccines showed similar and very high efficacy (> 90%) in all age groups, with a slight decrease over time that was marginally better with mRNA-1273, especially in younger adults.

In contrast, one dose of Ad26.COV2.S offered significantly less protection against intubation or death in the first month after vaccination, however, the efficacy increased and at 6 months was comparable to that of the 2 doses of the other vaccines. 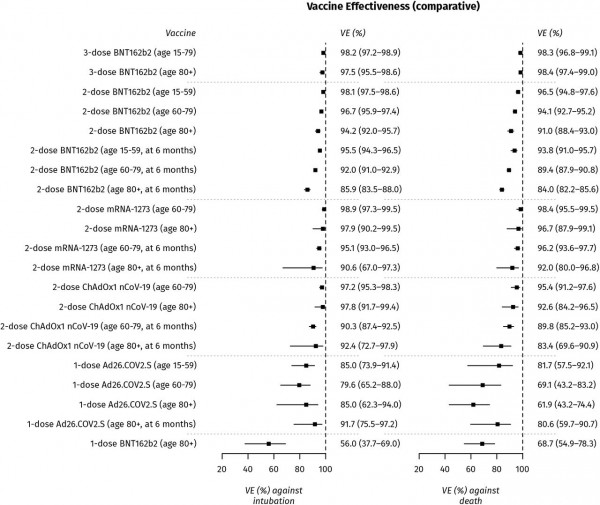 "The study confirms the huge individual and collective benefit from the vaccination against COVID19 and this is in fact demonstrated in the Greek population. That is why we are vaccinated with 3 doses, according to the instructions. "And if we are not vaccinated, we should start "yesterday"," says Mr. Lytras.