It's official - The Battle of Greece and Crete in 1941 will be commemorated in this years Anzac Biscuit Tin.

The Modern Baking Company which produces the Anzac Biscuit Tins annual has agreed to pay tribute to this important campaign in the WW2 and one of the strong links in the Hellenic connection to Australia's Anzac tradition.
This is the result of effective lobbying by Tony Tsourdalakis on behalf of the Melbourne-based Battle of Crete and the Greek Campaign Commemorative Council since early 2016. 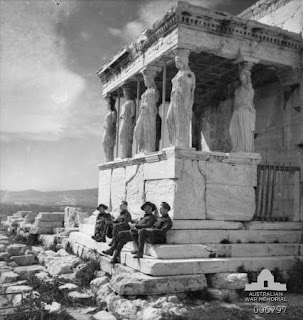 The Tin's will bear one of the iconic images from the Australian War Memorial photographic archives of the campaign.
It depicts Australian soldiers enjoying a brief period of leave in Athens before they made there way up to northern Greece to face the coming German invasion, shoulder to shoulder with their Greek and other Allied comrades. The photo (AWM ref 006797) and depicts some diggers visiting the Acropolis.

The brave diggers who came to Greece and Crete in 1941 were following in the footsteps of their forebears who had come to Greece in the First World War - to Lemnos and Salonika -continuing the Anzac tradition in Greece. And many remain in Greek soil in the Commonwealth War Cemeteries across the country - from Lemnos, to Thessaloniki, from Leros and Rhodes, from Phaleron in Athens to Suda Bay in Crete.

The biscuits go on sale Nationally in April 2017.
Let’s make this a big seller in honour of the Anzacs of 1941!