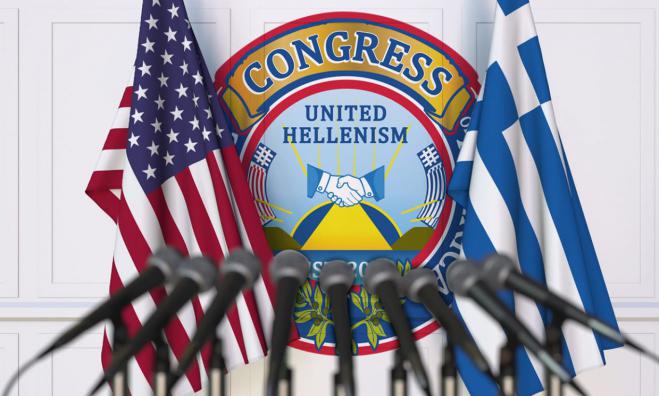 The Hellenic Congress of America in collaboration with the Federation of Central Greece USA and Canada and the Arcade Associations "Geros tou Morias", Evrytanon "To Karpenisi", Kastoria "Omonia" organizes its first Special Conference on the Voting Rights of Greeks Abroad from their place of residence, on Saturday, May 14, 2022, in the community hall "Nikos Andriotis" of Agia Aikaterini / Agios Georgios in Astoria from 11:30 to 4 in the afternoon.

Those interested can watch the conference at the following link: https://www.youtube.com/watch?v=5G-rKVw_i1o

Greetings: 1. Nikos I. Apostolopoulos, President of the Hellenic Congress of America

3. Presidents or representatives of the other bodies participating in the Conference

Elias I. Katsos, President of EMBCA

Dimitrios Christopoulos, Dean of Panteion University, (via Zoom) - Brief introduction on the history of elections and Abroad voting in Greece.

The Conference will also feature short-term online interventions by diaspora personalities from around the world, including:

Dr. Spyros Mezitis, endocrinologist, President of the Federation of Greek Medical Associations of America and Canada

I. Theodosopoulos, former President of the Greek-Canadian Congress

Seta Theodoridou, President of the Hellenic Community of Paris (France)

The conference will close with a brief presentation of the initiative of the Greek American Congress for the writing of the History of Hellenism in the United States by the head of the Commission, Professor Demosthenes Triantafyllou, who will introduce the head of the Writing Team, Dr. Konstantinos Hatzidimitriou.

The culmination of the conference will be the formal dinner that will take place in the evening of the same day at Terrace on the Park (Cocktails: 7pm, Dinner - award ceremony: 8pm). The late businessman and ardent patriot, Michalis Chalkias, will be honored with the Greek Excellence Award of the Hellenic Congress of America. The award will be received by his wife Aliki Chalkias, acknowledging her own important contribution.