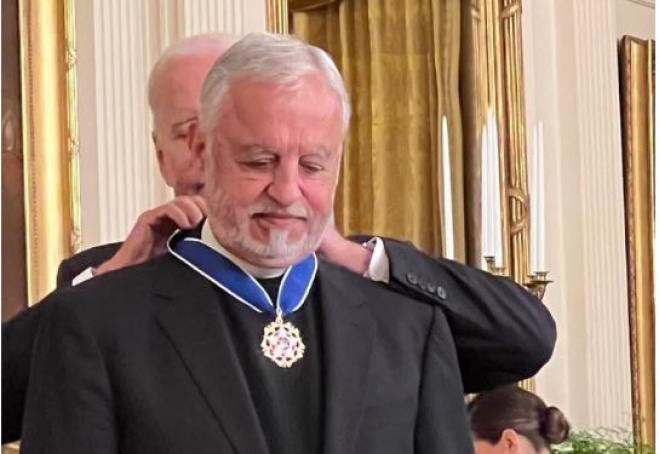 In a brilliant ceremony held at the White House, US President Joe Biden awarded the Presidential Medal of Freedom to seventeen important figures who "have made exemplary contributions to the well-being of the United States", as characteristically stated in the official press release issued by Washington.

Among the honorees is Greek Fr. Alexandros Karloutsos, who was born in Lajoi, Ilia and is considered one of the most powerful priests in the history of the Orthodox Church of America.

Known for his tireless action regarding the support and strengthening of Hellenism worldwide, as well as his dynamic stance on issues related to religious freedoms and human rights, "Father Alex", as he is called, served for a number of years as Special Assistant to Archbishop of America.

Fr. Alexandros was the driving force behind the effort to rebuild the Holy Church of Agios Nikolaos that collapsed in the September 9 terrorist attacks on the International Trade Center and was inaugurated the day before yesterday, twenty one years later. He is also the spiritual adviser to the Order of the Lords of St. Andrew of the Ecumenical Patriarchate in America.

Fr. Alexandros was the third Greek to receive the Medal from the President of the USA. The first was Archbishop Iakovos. He received this particular honor 42 years ago from the then US President Jimmy Carter. He was followed by George Tenet, former CIA Director, awarded in 2004 by President Bush.

At the same ceremony, 16 other personalities were awarded, among them the actor Danzel Washington, the first American woman to receive the coronavirus vaccine outside of clinical trials, the famous Simone Biles, the most awarded athlete in history (32 Olympic and World Championship medals), but also -posthumously- Steve Jobs.

Who is father Alex Karloutsos?

Father Alex was born on April 5, 1945 in Lajoi, Ilia. At a very young age he moved with his family to the USA, while he lost his mother when he was eight years old. This loss was decisive in his decision to become a priest.

He attended Hellenic College in Brooklyn, Massachusetts, completed his master's degree in theology from the School of the Holy Cross in Boston, and was ordained a deacon and priest in 1970, at St. Constantine and St. Helen's Parish on the south side of Chicago.

Ecumenical Patriarch Bartholomew appointed Fr Alexander Protopresbyter of the Ecumenical Patriarchate in 1994. This is the highest honor ever bestowed on an Orthodox married priest. In the late 1990s, he was assigned to the Holy Church of the Assumption, in the Hamptons, New York.

He is married to Presbytera Xanthi, with whom they have had three children and ten grandchildren.

Father Alexandros, Presbytera Xanthi and their son Michalis enjoy a close long-standing friendship with the family of the current US President, Joe Biden. The Presbytera is even a member of the Board of Directors. of the Beau Biden Foundation (founded in memory of the late son of the US President).

Father Alexandros and Presbyters Xanthi travel the world, support Greece, the Ecumenical Patriarchate, and the Diaspora in any way they can. "Father Alex" maintains close relations with several members of the Diaspora in America, including the US Ambassador to Greece George Tsunis.

A year before his retirement, Fr. Alexander was appointed General Hierarchal Commissioner of the Archdiocese of America and continues to work for the Ecumenical Patriarch Bartholomew Foundation