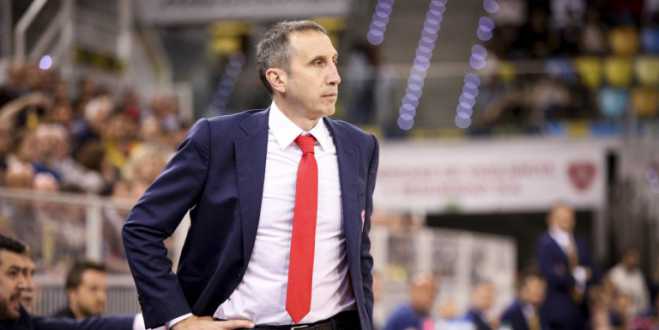 The 60-year-old current coach of Olympiacos, issued an open letter through the Greek basketball club indicating that his condition – specifically Primary-Progressive Multiple Sclerosis (PPMS) – was identified during last season, but Monday was the first time he made the information public.

Blatt, who also was previously the national team coach for both Israel and Russia, is considered one of the most successful coaches in European hoops history and is the only Israeli to be an NBA head coach. He was born in Boston, and grew up in Framingham, Massachusetts, graduating from Princeton in 1981 immediately before moving to Israel and serving in the IDF.As a youngster, Blatt went to a Reform temple, but has said that in Israel he became “much more Jewish and much more Zionist.” In 1991, he married his wife, Netanya native Kinneret, who played on a team that David coached. They have four children: twin daughters Shani and Adi, son Tamir (currently a player for Hapoel Jerusalem), and daughter Ela.On Monday, Blatt issued the following open letter through Olympiacos:“Sometimes life hands you things, that in real life have no rhyme or reason. These are the moments that force to make choices that will test your true character.“A few months ago, I was diagnosed with PPMS. This disease has many forms and acts out differently for every person. It’s an autoimmune disease that can really change in many ways your ability to do even the simplest things that used to seem normal.

“When I got over the initial shock and the painful realization of how it would change my life, I decided that I was not going to give up on anything. The only thing I could do was to adjust and find new ways to continue living as normal.“The first thing I did was to run to basketball coaching methodology in terms of how you solve and overcome obstacles. My procedure has three steps. 1) What is the problem?, 2) why did it happen?, 3) how can we solve it?“So, the problem is PPMS, which in my case acts out with my legs giving out. Fatigue, balance and strength are real issues for me. I’ve started a special treatment for muscular strengthening and balance, as well as swimming and water exercises in order to improve my physicality. I try to be more active, even when it comes to small moves. I challenge myself to do simple functions that are easy for mostly everyone, but very demanding for me in most occasions. I’m working on it. I sustain and expect more for myself, not less.“Why did this happen? The reason why one should suffer from this disease is unknown. As there was no specific reason or justification, what is left is to accept it and focus on how to make things better with the existing resources. It’s easy to fall into the pit of depression and inaction. This battle is real, continuous and never-ending, as there is no treatment for this disease. Though, it’s not life-threatening. There are people who have to face greater challenges and battle their own war. We all must have the courage and determination to not give up, to move forward and live a qualitative life. Forget about “whys” in this case. It’s a question that can’t be answered.“How do we fix this? We go to work. We make a plan. We work hard every day. We keep our head up high. We adjust, differentiate and find ways to improve or sustain ourselves. We learn. We find people that we can trust and help us. We are open and honest to ourselves and those who try to understand. We do not hide, nor do we shy away from the notion of sensibility. I’m blessed for the support of so many good people. Those who through their support helps me realize that I remain the same, even on these days when I act differently. Those who don’t let me forget about it when I’m down. Having pity for yourself offers you nothing, quite the contrary; it creates and encourages a downward spiral.“I’m a coach and my job is to lead, to teach and inspire many people. The fact that I’m not that mobile or active does not affect my mental ability to do these things. I’m lucky. I have great doctors, coaches, physiotherapists and organization, that accept my malfunctions and help me get over them. How is it even possible to complain? By no means. could I do this. It would be a waste of energy. I ask my players and my staff to be their best version of themselves. I should ask, or more precisely require the same for myself.“The great John Wooden once said: “Things work out best for people who do their best regardless of the situation”. My condition is no picnic, but many have to go through worse. It’s my responsibility to set up an example for everyone, in order to live their life in the best way possible and never, never give up.”