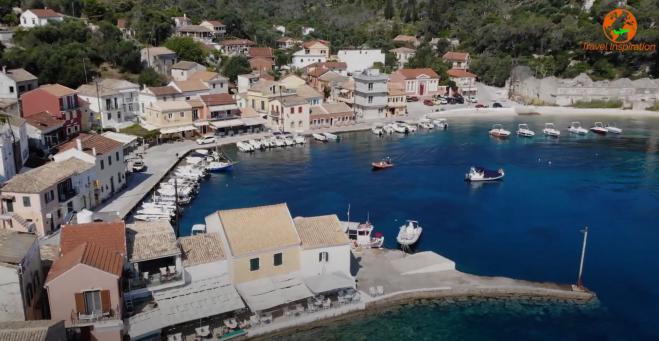 When the god Poseidon used his trident to create a love nest for himself and Amphitrite, he could not know in advance the beauty that the island would exude with this move. And being cut off from southern Corfu may have finally given birth to what he really wanted, but he lost his trident during this effort, which the Paxians found and made their emblem.

So from the moment that an island was created purely because of "love", it could only cause love and admiration to all its visitors, and friend Marinos Charalampopoulos has graced us with another of his beautiful videos from this most beautiful island of the Ionian.

Longos is the third and smallest settlement on the island after Gaios and Lakka. It is a picturesque, traditional village with a purely Ionian air, surrounded by greenery and of course the eternal blue of the life-giving sea. The trees reach the edge of the settlement, while the small port with the shallow beach on the left is all you need to live calm and carefree moments. The fishing boats rock on the love call of their permanent mistress, reminding you at once of the beautiful myth of the creation of the island.

At the edge of the settlement next to the primary school the old Olive Mill - Soap Factory, stands abandoned, but proud. It was built by one of the oldest families of Paxos, the Anemogiannis family, and years ago was a source of life for the whole island.

Small churches, old mills, colorful buildings as well as traditional fish taverns and bars, compose an idyllic setting, just a few kilometers from the capital of Paxos, which will stay in the hearts of all those who will visit it, offering them , security but also joy of soul.

So judging by the result, one thing is for sure… if Poseidon's love for Amphitrite resembled Paxos even a bit… then yes, it was a tender bond, which all it needed to last forever was this island!!!