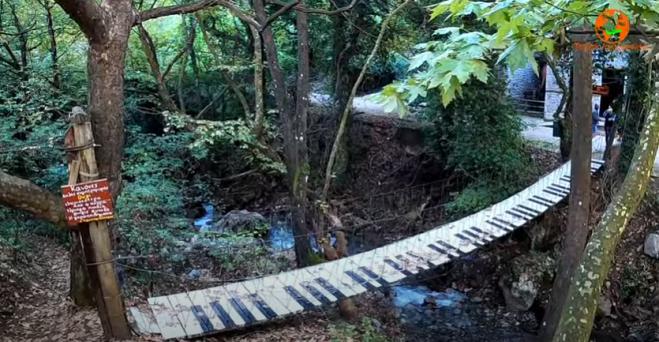 One of the most mountainous settlements in the prefecture of Fthiotida is  perched on the green slopes of the mythical mountain Oiti, at an altitude of 1,040 meters , the beautiful village of Pavliani. It is an affordable destination, as the distances from the major urban centers of the country are relatively short, not exceeding about three hours. Our friend Marinos Charalampopoulos takes us on a tour of beautiful Pavliani.

With a long course through the centuries, Pavliani is attracting more and more excursionists, covering every requirement, since its beauty varies according to the seasons. Both in the winter months covered in white, as well as in the summer months, with green dominating every corner, and always in combination with the calm and relaxation that reflects the place, surpasses demands of all and offers a carefree stay, emphasizing in its own way its diversity.

Known since ancient times, close to the ruins of the temple dedicated to Hercules, the place where according to mythology this invincible demigod immersed himself in fire in his attempt to get rid of the poisoned tunic that he was inadvertently given to him by his wife Dianeira, leading him to a horrible death, gains in her way some of its mythology, thus filling the beginning of the pages of its own story. As for the theory of its name, it is said that it owes it to its first inhabitants, who were the first to believe in the teachings of the Apostle Paul, while a more probable version is due to a Slavic name.

The village has joined the Habitat Agenda, a pilot project that concerns the sustainable development of traditional villages and the execution of pilot renovation projects to upgrade them.

One of the most important attractions of Pavliani, is the natural amusement park in the springs of Asopos, which proves the love of all for their place. With an enviable effort, the students of the village with the valuable help of the teachers, through a magnificent path next to the running waters of the river against the background of the centuries-old trees of the park, proved that nothing is impossible. Hammocks, bunk beds, nests, cable cars over the river, bridges, tunnels and secret paths with imaginative signs with information and instructions throughout the route, invite you to live a unique experience and become a child again for a while.

From the village also start many small or large hiking trails, such as the one that leads to the "Throne of Zeus" with a panoramic view to the Gulf of Malia, but also the one that leads to the "Iron Throne", a construction of 550 kilos of iron and special blades but also 800 hours of volunteer work, which refers to our Game Of Thrones and which took shape in April 2019.

Another beautiful route full of waterfalls and many more surprises is the one to the wetland of Tziros, the place where the rare fish Attikopsaro lives, as well as the one to the plateau of Katavothra, the place where Zeus, unable to bear to see his son burning in the fire, tore the rock with the force of his lightning, thus creating the steep ravine where the waters pour into the river Gorgopotamos and raised Hercules forever to Olympus ...