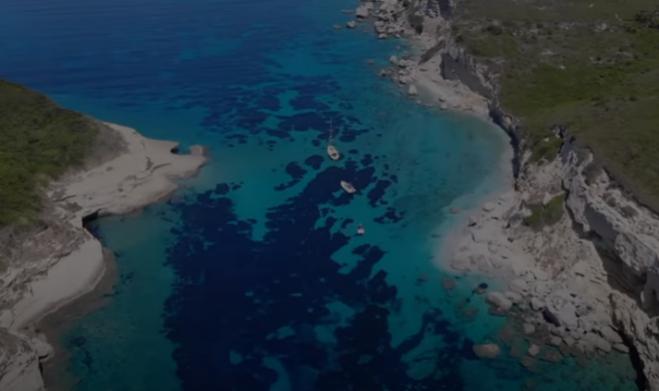 The archipelago of the Diapontian Islands in the northwest of Corfu, consists of 11 small islands which have become known as the "Othonoi Islands". And the three largest and most inhabitable islands of the complex may steal the show, however, there are many small uninhabited islets that are really worth looking into for a while and enjoying the peace and tranquility that they so generously offer. Marinos Charampopoulos takes us on a brief tour..

Diaplos is one of these micro-islands of the Corfiot seas of the Ionian Sea and is located opposite Agios Stefanos Avlioton, halfway from Mathraki, the smallest inhabitable island of the complex, to which it belongs administratively.

It has an elongated shape with steep shores and intense turquoise crystal clear waters surrounding it, giving it a crystalline uniqueness that you rarely find in places with strong weather. In fact, due to these phenomena, there was erosion and a retreat of part of the coast to the west of the island, resulting in the disappearance of the only source which gushed fresh drinking water and existed on the island until a few years ago.

The only house on the island is the small church of Agios Nikolaos around its center. However, there are many animals on the island, mainly hares but also seagulls, while seabirds nest in its peaceful and cool paradise, knowing that they are miles away from noisy people.

In the past on the island, there were many donkeys left free by the villagers who had their agricultural crops there (mainly vineyards), and for this reason, the second name of the island is Gaidouronisi.

It is worth noting that the Diapontia complex has been designated as a Special Protection Zone, part of the Natura 2000 network, while it is suitable for people seeking natural beauty, peace, and tranquility during their summer holidays.