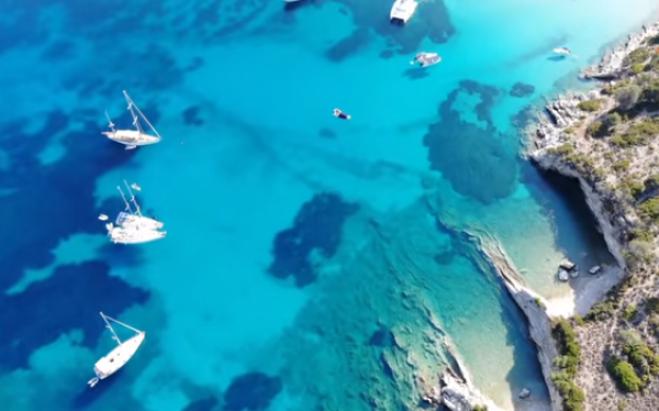 In the heart of the Ionian Sea, a very short distance from mainland Greece, is a beautiful picturesque island, called Kastos. Kastos is the smallest inhabitable island of the Ionian Islands and is only 6 miles from Mytikas in Etoloakarnania, from which access to the island is provided by daily services. Our friend Marinos Charalampopoulos gives us a taste.

It is a tiny island with a uniqueness that wins everyone over. The stone windmill on the left side of the port, which is in fact the only one in the wider area of ​​Lefkada, is the trademark of the island. Every day it greets all the boats in the area with kindness, waving its sails lazily.

As for the small homonymous settlement of the port, which is the only one on the island, it is built according to the island's traditional architecture and has only the essentials. Two small coffee bars, a grocery store, two taverns, and a lot of tranquility, against the backdrop of the most wonderful clear blue waters that the visitor needs to leave and escape from the crowds and his daily life.

And during the day the small boats can sail around Kastos in order to discover all the beauty that hides along its coastline, such as the cave Fokotrypa, which inside has a small sandy beach and is considered one of its main attractions. of the island, but as night falls, the tranquility that spreads mainly due to the lack of wheeled vehicles on the island, is truly unique.