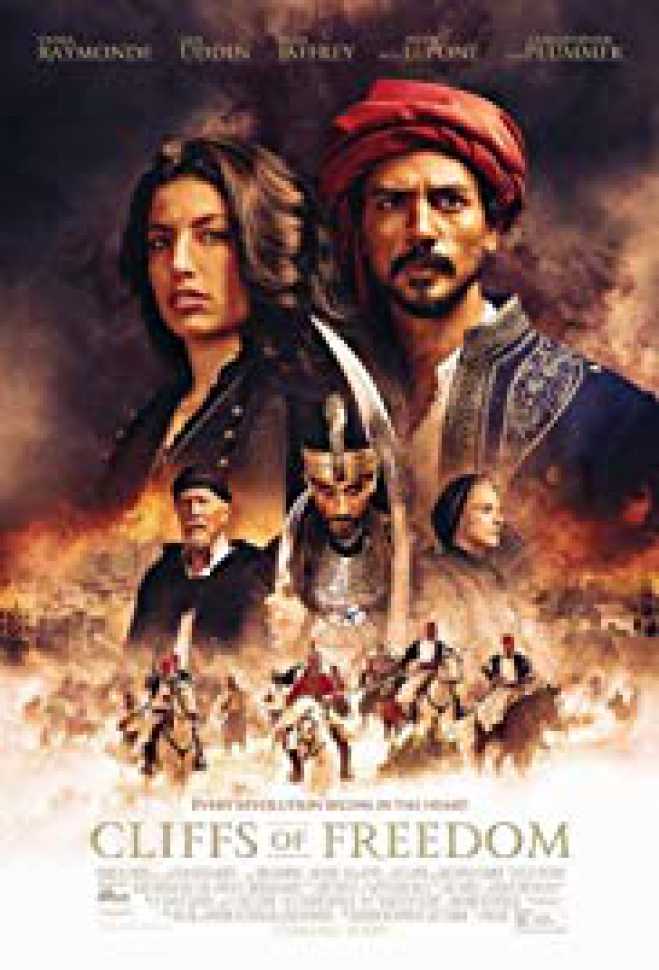 CLIFFS OF FREEDOMis a romantic historical epic film, that is the first Hollywood feature film to tell the story of the Greek War of Independence of 1821. The film was a passion project since the 90s, for Executive Producer and Co-writer Marianne Metropoulos, who spent several years developing a story that would bring the Greek war for independence alive for modern audiences. Along with Hollywood’s veteran film Producer, Casey Cannon, Director Van Ling, and Executive Producer, Dean Metropoulos, Cliff’s of Freedom tells the story of Greece’s struggle for freedom after centuries of iron rule and oppression by the Ottoman Empire.

The film stars Tania Raymonde as Greek freedom fighter Anna Christina. Cliffs of Freedom is love story between a young Greek girl and a Turkish Ottoman Colonel during the dawn of the Greek War for Independence, the film is directed by long-time James Cameron collaborator Van Ling (The Abyss, Terminator 2, Titanic).

Cliffs of Freedom is inspired by historical events that occurred almost two hundred years ago. The story sees conflicted Turkish colonel Tariq spare the life of 12 year old girl, Anna Christina. Years later the two are eagerly reunited, but as the Ottoman empire continues its reign of terror on Greece, Anna Christina is compelled to join the Greek rebellion and lead the fight against the man she loves.

Yanna Darilis caught up with the Director Van Ling, to talk about bringing these historical events to life through this story.

YD:  What inspired you to tell this story about this period of Greece’s history? Did you have knowledge about these historical events prior to this script; what impacted your emotions the most about this story?

VL: Well, as is appropriate for this film, it started with a woman: a Greek-American named Marianne Metropoulos had come up with a story idea in the mid-90s about a Greek village girl who falls in love with a Turkish officer, and wanted to develop it into a film.  She spent many years working with different Hollywood producers, but it was only when my producing partner Casey Cannon came on board around 2010 did things really start to go somewhere.  This was partly because Casey’s a strong and determined woman, and also because with over thirty years of experience in the film business, she knew how to produce it, yet was not tied to the usual studio mentality where they assess any project based solely upon its potential box office return.  There was literally almost no interest in mainstream Hollywood for stories that took place in this historical period, unless it could be done for little to no budget… which would not have done justice to any story that touched upon the Greek War of Independence.  Casey took it on as a challenge to help Marianne get the film made in a way that would do the best justice to her story and reflect Marianne’s sense of passion for it.

So during the many years she worked with Marianne on honing the story and explore the logistics of making it, Casey would bring me in as a creative consultant.  She and I would brainstorm how to get from point A to point B in Marianne’s original story, and I would make suggestions and Casey would say “why don’t you write that up?”  So what started as story notes became full scene descriptions and dialogue suggestions, and by 2014, I had done a complete rewrite of the entire story and script, and was invested in the storytelling.  I think that’s why Marianne ultimately decided to ask me to direct the film.

I love history and doing research, so I was fascinated by this period of world history that I knew nothing about when I started.  And one of the things we as filmmakers try to do is find and focus on things that resonate emotionally with other people, not just the culture at hand, so it’s not just a foreign story from a distant time and place, but a human one that is relatable to what’s going on now.  And it seems that revolutions, hope and resilience never go out of style. Also, the opportunity to try to work with and develop a strong female protagonist, just as I had watched my mentor James Cameron do in each of his films, was fantastic.

YD:      Films based on history tend to have two sides of the story at times, how important was it to stay true to the facts, and what kind of team did you compile to make sure that the history was portrayed as it truly was?

VL: As a first generation Chinese-American born in the US, it was very interesting to see the parallels and differences between cultures and try to bring a more objective view of the historical events as recorded.  But in this case, even our Greek historical consultant, Eleni Drivas, noted that there is “no consensus” as to all of the facts in this period of Greek history.  It’s interesting and fraught when one culture’s or faction’s or person’s facts are another one’s propaganda.  Everyone is certainly entitled to their own opinions, but if you’re the kind of person who balks at the fact that a Greek and a Turk could fall in love, then maybe this movie is not for you!

For my part, I tried to find a balance between compelling storytelling and historical accuracy.  I always want to do both, but the challenge here was that it was like “Rashomon” in terms of the actual historical facts.  Marianne said to me at the start of the project: “when in doubt, ask a Greek”; and that’s what I did… and I quickly found out that each and every Greek person has a different upbringing and opinion as to what actually happened, or what to say, or even how to make the sign of the cross, based on what they were taught… and each one of them is vehemently adamant that their way is the only way. The old joke that even Marianne told me was that if you put two Greeks in a room, you will get three opinions… this is why the Greeks had to invent democracy!  So at a certain point, I tried to find a balance, which was tough when everybody disagrees with each other on every little detail except on the fact that I was portraying it wrong!  So there was a lot of narrative instinct and compromises throughout the process.  But I hope I was able to capture the spirit of Greece and reveal some common humanity in a story that mixes fictional characters and events with real historical ones, since we were not making a documentary here.

YD: Tell us about the fictional Romeo and Juliet element, and why it was important to tell this story?

I really can’t speak for Marianne Metropoulos, but I believe she wanted to celebrate her Greek heritage but also do a romantic storyline that was universally relatable, with themes of family and honor and vengeance… and to also say that love can make a difference in bridging entrenched cultural hatreds and bringing about change, through deeds or through inspiration.  At least those were the aspects that I latched onto as elements in which everyone could find personal meaning, not just Greeks and Turks.  In stories of war and oppression and sacrifice, there is often a tendency to focus on the hate and the atrocities and to forget that there are human beings and personal emotions at the core of every conflict on both sides… and these can either be used to further divide people and perpetuate hatred between cultures, or they can be used to understand, mend and heal… often at great cost.

YD: Greece’s history is vast and the heroic spirit is portrayed throughout time in various historical accounts of wars, what were you looking for in a producing partner and director in order to capture the essence of this historical story, and what made you decide to work with producing partners Maria Metropoulos and  Casey Cannon, to bring this story and these characters to life.

VL: It seems to me that the history of Greece is a history of tenacity and determination, and it took a whole lot of both to get this movie made. At a screening recently, one Greek viewer told me that this film was 200 years in the making, which is certainly both a humbling thought and a responsibility I took very seriously when directing the film.  I had worked with Casey for almost thirty years, and I could see that Marianne had the gumption and wherewithal, just not the experience in filmmaking… but that’s where Casey and I came in.  So it was about finding partners who were able to collaborate and respect each other under fire, which is always a challenge.  But I’m very grateful to Marianne and her husband Dean Metropoulos for trusting me with her very special passion project, and I’m forever grateful to Casey for fighting alongside me and inspiring me every step of the way. It’s been an honor to work on this film.

YD:   The #Metoo is movement in the production notes.  I’d like to know more about the movement’s relevance to the movie.

VL: One could make the argument that the history of human society is also a history of the suppression of women as equals; this is true for pretty much all patriarchal cultures. Turkish culture famously had their harems, where women were seen as playthings or hens in a coop for producing heirs.  In this period in Greece, as everywhere else, women were considered prized property who heeded the orders and desires of men, and dutiful daughters were often used as social bargaining chips for advancing a family’s fortunes and cementing strategic relationships. Women were often given protection, love and respect, yet no agency to do what they wanted or be someone other than what their culture decided they could be.  Women had to cede their lives and control of their bodies to the men and the dictates of their culture; it is just how things were around the world then, and often even today.  Yet there is a proud history of strong women in Greece, from the Yia-Yias in every family to the sacrifices of the Women of Souli to the legendary women freedom fighters like Bouboulina and Manto Mavrogenous.  We deal specifically with some of these ideas head-on, as our heroine evolves from a dutiful daughter with scandalous notions no one believes to someone who loses everything because of love and faces every kind of male response in the process, from flippant misogyny to attempted assault, from grudging respect to full-on equality where gender is not even an issue.  Through all this, she is forced to redefine herself and her own destiny in the midst of great turmoil and conflict, both in her world and in her heart.  That all seems pretty relevant to what’s going on today as well.

Cliffs of Freedom will be released nationwide in a theatrical release via Cineworld from March 2019, in the UK, USA and Europe, ahead of Greek Independence Day on 25 March.