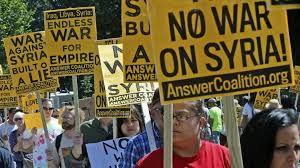 People protested against President Barack Obama's call for a U.S. military strike against Syria on Saturday, tirelessly chanting "They say more war; we say no war," and gave speeches outside the White House.

Speakers said the picket line marks a line Congress should not cross as it prepares to vote on this issue. It was reported that Obama left the White House during the protest, traveling by car to Andrews Air Force Base to play golf.

Lawmakers in both parties oppose Obama's request for Congress to authorize using military force against Syria, the Obama administration blames President Bashar Assadin for the chemical gas attack last month. The Senate Foreign Relations Committee approved a measure earlier this week that would authorize a strike. The first votes by the full Senate are expected on Wednesday.