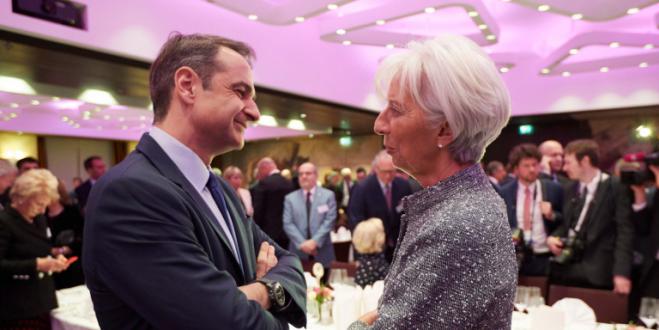 After taking over her new duties as head of the European Central Bank Lagarde's, the prime minister will meet with her on the occasion of a dinner in honor of Benoit Coeure, who is leaving the ECB's board.

The prime minister, the only politician invited to the dinner as he has a personal relationship with Benoit Coeure, will be in Frankfurt this afternoon and will have a private meeting with Mrs Lagarde in the afternoon to present in detail the course of the Greek economy,the situation in the banking system, as well as the targets set by the 2020 Budget, which is being voted on by the House on Wednesday.

The climate expected by Mr Mitsotakis is thought to be particularly positive, as just last week, when asked about Greece's course, Christine Lagarde said, "It is a great story for me personally, with other qualities, and I am really excited when I see progress, recovery, when I see results. I would like to congratulate Greece. "