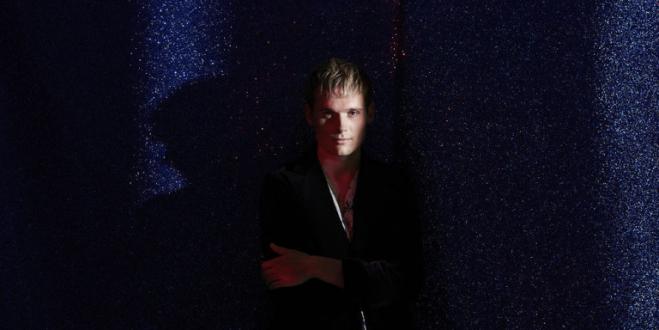 The story of Briton Harry is that of a young man who had an accident that made him look at life differently. In his case he somehow linked it with Greece ...

Coffee and baklava at sunset. The sparkle in the eyes of the locals when you pronounce a Greek word correctly. These and of course are famous and irresistible slices of life that constitute some of the elements of Greece that win foreigners over. Elements so deeply intertwined with Greece that as Greeks we often overlook them, we do not pay attention to them.

The "Waiting for Smith"'s Harry Lloyd describes in iefimerida how he found peace in Greece in the summer. This is how the song Peace In Greece came out, which was released recently.

The accident in the Alps that changed his life

Harry was working as a ski instructor in the French Alps when a serious accident forced him to stay in bed for more than a year. A time during which he changed his life forever. He decided to take the time he needed to recover in the most creative way.

"I realized that I was going to be in bed for a year and I had to do something. And when you've bought every poet, listened to all of Bob Dylan's recorded work and seen all the Peaky Blinders seasons, you have to learn something, " the artist told iefimerida and explained that the dilemma was a musical instrument or a foreign language. "As I like to learn foreign languages ​​in their home countries, I thought 'what the hell, I'll learn guitar'" he added.

He learned guitar while lying in bed, practicing every day for a whole year. Already in 2019, a sample of his first work with the single Trade In was released on 72 radio stations around the world.

Harry Lloyd recorded the song Peace In Greece at the legendary Abbey Road studio, where musical legends, such as the Beatles had recdorded their work. "Watching a group of instruments tune into complete disharmony, arrange and then play your music in Abbey Road Studio 2 is just one of the best emotions in the world," he goes on to say, "I smiled so much, I thought that my cheeks would peel off. "

The Brit's Ode to Greece
Harry Lloyd acquired his first memories from Greece at the age of 6, on beautiful Spetses. "I shaved my head, I wore a necklace and I was so tanned that the locals thought I was half Greek," recalls the creator of Waiting for Smith.

Harry Lloyd found peace in music and in Greece
That summer the heat had hit red. "It was so hot one night that I was sweating a lot, and when I woke up, I thought I had wet myself in bed. I was literally "stuck" to the sheets," Harry describes gleefully about the Greek summer that he nevertheless always remembered.

In Greece he found peace and this is perceived even in the way he talks about the country. Harry looks like a man who loves to paint pictures. Moments of everyday life that are hidden and unique messages. Like the "fisherman's sound when they say 'Hey, what are you doing?' Or 'How's it going?' From afar as they reach the port with careless ease" he describes. he enjoys watching the boats anchored in the harbor, as it resembles the sound of good music, as he says.

Harry, Victoria Hyslop and the serenity of Greece
The love for Greece is pervasive in his family. We learn that his father is a very good friend to another Brit who has loved Greece as if it were her own. Victoria Hyslop, the author of the book "The Island", was one of the first to hear his song about Greece, and as he revealed, she loved it. "Shee told me "file mou" (my friend in Greek) this is a great song! Truly. I like it," Harry says of the British writer, adding that Hyslop "is a a woman of few words, but what she says she really means."

Despite Hyslop being a family friend, Harry Lloyd explains that he has not yet read her wonderful book on Spinalonga. "I haven't read 'The Island' yet, but I'll do it now, thank you."