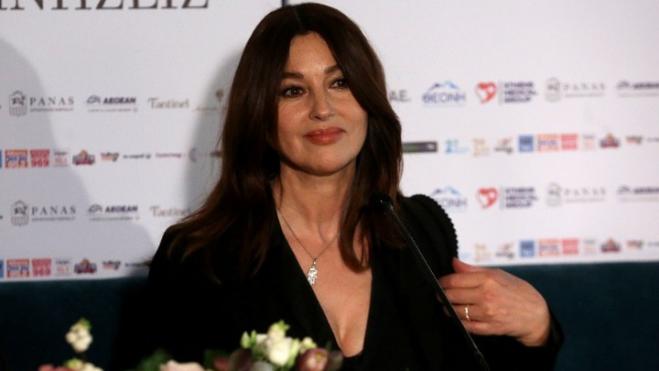 Internationally renowned film actress Monica Bellucci is in Athens to perform the monologue "Maria Callas: Lettres & Memoires" by Tom Volf, which she will perform in French on the stage of the ancient Herod Atticus Odeon theatre beneath the Acropolis for three nights, on September 21-23.

Bellucci held a press conference for Greek journalists following her arrival on Sunday, talking about her initial hesitation when Tom Volf offered her the part, which was her first experience of acting in the theatre and "so different from the cinema", and her love of Greece.
In the end, she added, she could resist as Callas' letters were "filled with emotions, fragility and honesty" and revealed a woman who had led a brave life, followed her heart and had not compromised.

According to the people that knew her, Callas did what she wanted and knew what she was doing, Bellucci said, sacrificing her life to music and her career and then seeking to live her wife as a woman once she met Aristotelis Onassis. Maria Callas remained a modern woman and one who inspired, the actress added.The production premiered in Paris in November 2019 and had been scheduled to take place in Athens in 2020 but was postponed due to the pandemic. The high demand for tickets led organisers to add one more day.

The monologue is based on a book by Tom Volf, who is also director of the play, and his recent film "Maria by Callas", in which he collected more than 350 unpublished letters written by the diva between 1946 and 1977 from personal friends, foundations and private collections.
The letters are read out in chronological order and shed light on hitherto unknown aspects of Callas' life, from her childhood years in New York to the war years in Athens to the first steps of her career and her love affair with Onassis.