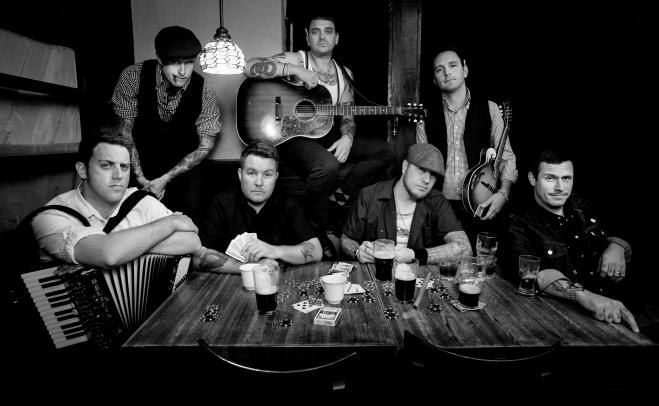 Dropkick Murphys are going to be performing in Athens at the OAKA Olympic Sports Complex, on Monday 13 June, along with local boys Villagers of Ioannina City, and The Rumjacks, and Fundracar We caught up with Tim Brennan in Sweden, before their arrival in Athens, for the show we will surely be attending. 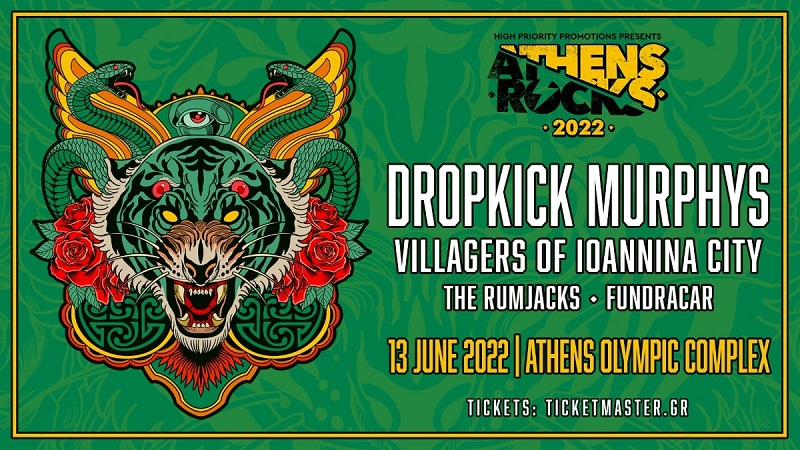 Dropkick Murphys are an American Celtic punk band formed in Quincy, Massachusetts in 1996. The band's early influences were punk bands like Greenland Whalefishers, Swingin' Utters, the Ramones, the Clash, and Sex Pistols, as well as the Pogues and Irish bands such as Stiff Little Fingers and the Dubliners.

While frequently referred to as a Celtic punk band, some of their earlier material has also been classified under other punk rock subgenres like Oi!, street punk and hardcore punk.

Q: It’s an honor to speak with you. I have listened so much to your music. So thank you for your music. And so shall we start? I have some silly questions at the beginning, like why Dropkick Murphys? What's the story behind the name?

Tim Brennan: Back in the day in the New England area, there was a guy who was a boxer who went by the name Dropkick Murphy. He started a sort of a primitive dry out place for alcoholics there. It was kind of like an early version of a house where people could get sober from alcohol. And when guys were growing up and, you know, getting out of hand, their parents would threaten them with “we're sending you to Dropkick Murphy’s”. So that's where it came from. 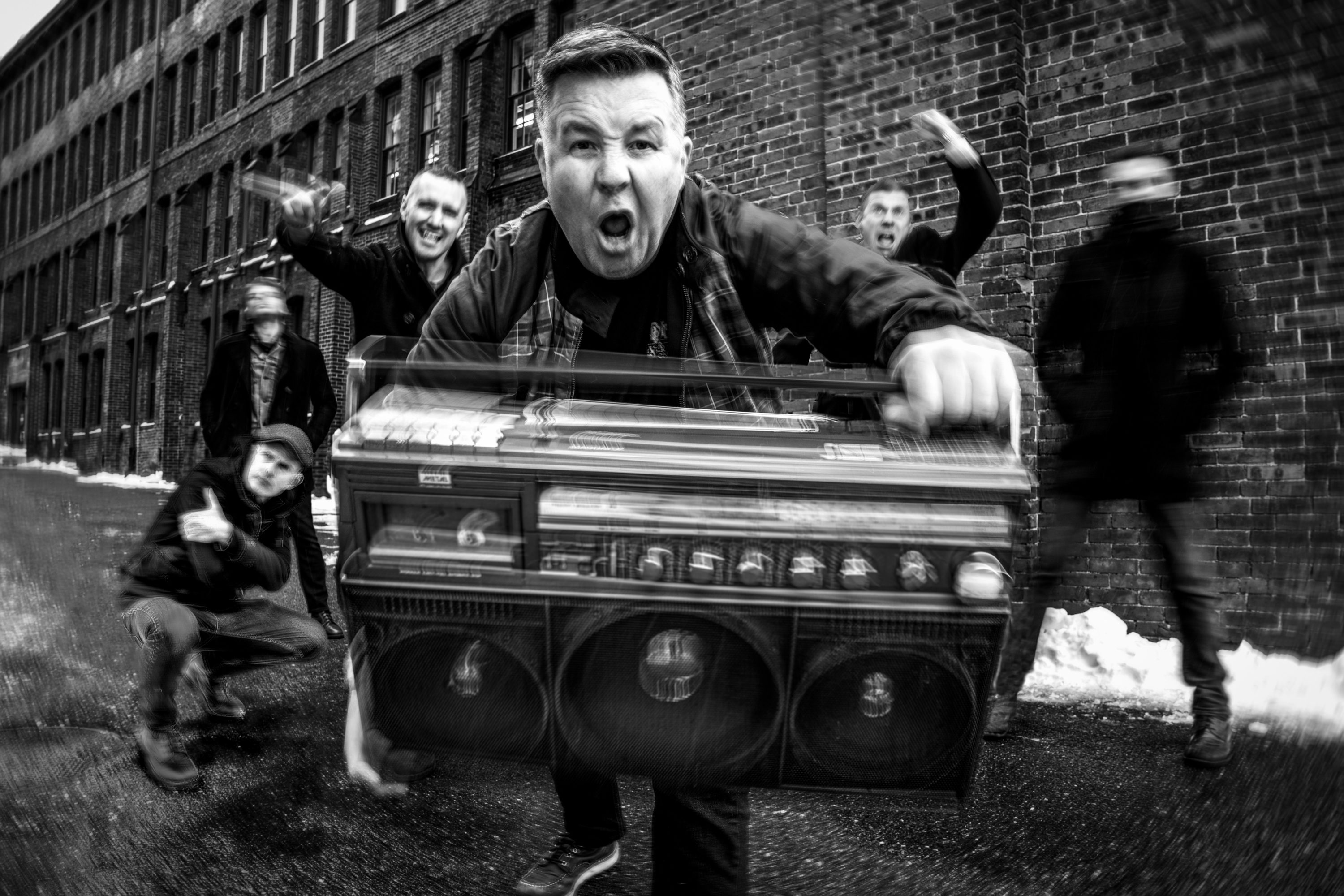 Q: Okay, your latest album “Turn up the dial”. Very, really uplifting album and very fun to listen to! I believe it came out in 2021 amidst the first pandemic. How did you decide that it was the right time for releasing such an album?

Tim Brennan: Well, you know, we were in the midst of recording before the pandemic happened. So we had already intended to get the this new record out. I do think that the pandemic sort of shaped it in the sense that when we were in the studio recording, we wrote all the songs and everything and then we went into the studio. Normally you record more songs than you need, and you sort of pick and choose which ones you want to put on there.

And so the pandemic forms the album as far as what songs to put on it. We were conscious of the fact that everyone had been through absolute hell over the past year or however long it had been going on before it came out and we said we just want to give people just sort of uptempo fun stuff, for the most part with the exception of the final song, “Wish You were Here”. We didn't want to get super serious and reflect on what had been going on because everybody had been having such a hard time with it and we didn't need sad music about it. So, we said we're just gonna make a giant party album. And that's what we did

Q: With great success, if I may say so. What's the story behind “Mick Jones Nicked My Pudding” and are we talking about Mick Jones from the Clash?

Tim Brennan: Yes, yes, that is a totally literal song. Um so our producer, Ted, is an Englishman with whom we’ve been working for the past 10 or so years, 12 years now actually. And when we were working on the first or second album that we did with Ted, he was telling us a story about how he was in a studio one day. And it's a sort of the type of thing where there were multiple studios in this one complex and Jones from the Clash, was there doing something in one of the other studios. At a lunchtime, Ted went into the kitchen where he had brought his own food for the day and he walked into the kitchen and Mick Jones had taken the pudding that Ted bought and was standing there in the kitchen eating it and he said, hey, that's my dessert, you got there man. I think Mike jones was nice about it, but we heard that story and we were like, we will eventually write a song about that clearly. Like I said it's totally literal, there's nothing metaphorical about that song. It is literally about Mick Jones from the Clash, taking a pudding that our friend Ted had bought for himself!

Q: Okay, let's travel a bit back to time. You were a local band who has become a worldwide sensation without losing what made the whole world like your music, How do you keep the famous fever down?

Tim Brennan: Nothing from the day I joined this band, 19 years ago, has ever felt like it's changed apart from the amount of people that we get to play to tat hese festivals and coming over to Greece and things like that. The number of people coming to see us has changed in a wonderful way. But apart from that, nothing has really changed. The band from day one has sort of operated the same. It's a very sort of blue collar, working class ethos that was brought into the whole thing.

You know, we rehearsed at 9:30 AM. It's just how it's always been. And then luckily, you know, there's six of us in the band, there's five band members. And so, there's enough of us that we're sort of anonymous in the sense that we're not walking around at home getting recognized or anything, and so despite how wonderfully mass the band has got, nothing ever feels any different, as far as how we think, so that's always been nice.

Tim Brennan: We're actually going to make a big announcement about this in the next couple of weeks, but we just finished working on some new stuff where we have incorporated some new things that I won't say too much about, yet. We started stretching our legs a little bit, musically, and incorporating some different stuff. I'm super excited about exploring that sort of thing musically. I'd hesitate to use the term country, but we certainly explored some Americana sort of bulkier side of things on the new stuff that we've just finished working on, and so that's been great. 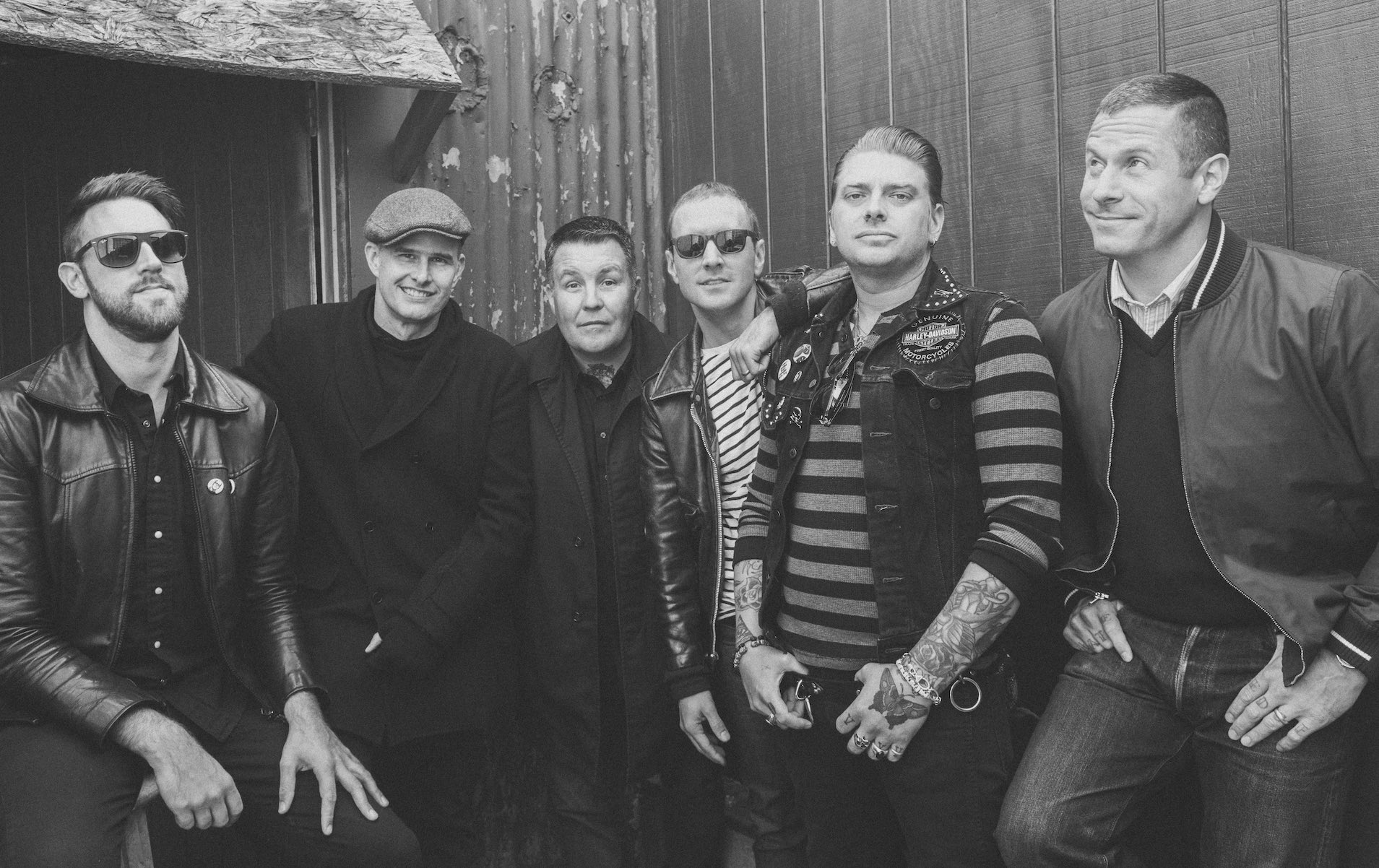 Q: That's wonderful. Are we going to have a sneak peek of your new stuff on Monday June 13 here?

Tim Brennan: Yeah, so we've been giving a tiny piece of the new stuff. We haven't been able to get over here since “Turn up that dial” came out. So we were playing all of what was considered still new stuff from that current album and then we're playing a song or two from this brand new stuff that nobody even knows about yet. So that's been exciting. And you know, now that we're starting to put the word out that we just finished a new batch of songs, hopefully people will be excited to come out and hear that new stuff

Q: Can I make a political kind of question, I know that, that you support unions, I believe your merchandise is All Union made right? You do serious charity, donate a whole bunch of earnings to support charities that support Children, veterans and substance abuse recovery. Uh you two sides when speaking for politics, How does that affect your fund base? I mean, have you ever heard heard a fund saying I love your music, but I heard your political views

Tim Brennan: Um yeah, obviously, especially, especially since, these days in the past couple of years has been pretty polarizing, politically speaking. Um we try not to dwell too much on the politics of things. We're really just trying to, to play music for people to enjoy themselves to, you know, obviously, obviously we have our own views and stuff. But yeah, I mean you're always going to, especially in a politically charged time like this, you're always gonna run into somebody who says, you know, I love your music and stuff, but I disagree with what with your political views or whatever. Um luckily I try not to concern myself too much with that, especially when it comes to dropkick Murphys, um you know, I love writing music and playing songs and, and, and that sort of thing. And so that's what I do. You know, I

Q: That's what, where you focus most.

Tim Brennan: Yes, I'm happy to provide 3.5 minutes of music for somebody to forget about the fact that everybody is politically crazy and uh, and divided these days, you know,

Q: How have you been dealing with all that's going on now. I mean, if long your tour, there was a mass shooting in an elementary school, this is something that we are not familiar in this part of the world. If you want to answer, I know that it's a difficult subject.

Tim Brennan: Yeah, I mean it's definitely a difficult thing that's going on. I, I don't know. It's, it's such a crazy messed up time right now. Everybody, everybody is divided on everything. Um, and it's a sad state of affairs that we have right now, with shootings and everything like that in America. That's tough to see every day. It's a horrible thing to have to be, have to be uh, seeing every day, you know?

Q: So let's lighten up a bit of subject. So I need to question, what are you doing when you're not recording or touring, what's the ideal day or vacation for you guys?

Tim Brennan: I suppose with the amount of time that we spend on the road, ideally when we're not recording or touring guys just really like to be at home with their, with their families. Personally, I still write music all the time. Whether it's for future dropkick stuff or just to give myself something to do. I mean it's really the one thing in my life that I'm decent at, so I try to keep doing that is so that I can feel like I'm contributing something to society. So, I love just hanging at home, when we're not doing anything. That being said, I am pretty much always, working on music and stuff, but it's hardly like something that feels like a job. It's still so much fun and it's what I love to do, so I'm happy to continue doing it even when we're not on the clock, writing a record, or recording, or whatever.

Q: Would you care to share a funny moment? Something that we will remember in the future.

Tim Brennan: So far, nothing crazy has happened, but it's early yet. We're playing a rock festival in Sweden tonight, who knows what could happen. But so far, everything's been pretty normal so far. So, so far so good. That's great.

Q: So that's it for me. It was really a pleasure. Thank you very much for your time and I will definitely see you on Monday.

Tim Brennan: Thank you so much. Have a great day.