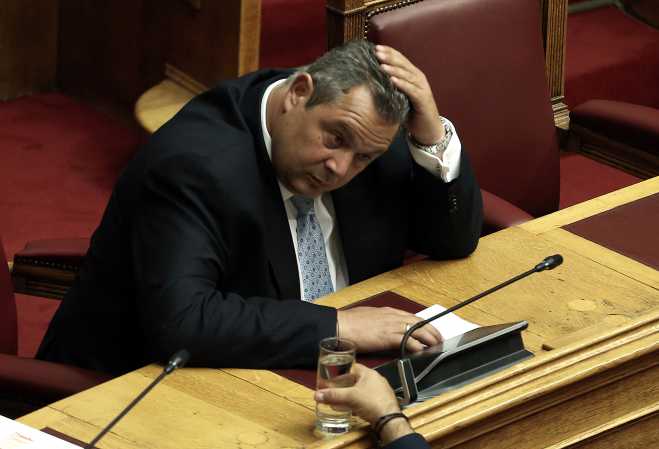 The thriller of the ruling coalition is reaching a crescendo. ANEL President Panos Kammenos denounced Alexis Tsipras of being in danger of becoming prime minister of the "government of defectors".

SYRIZA will need to get the votes of its partner's MPs to pass the Prespa Agreement, that Panos Kammenos has threatened to remove from party lists. He has called for his party's parliamentary group on Wednesday to discuss the next steps. It might then be possible to record who sides with whom.

The key number of MPs so that Panos Kammenos may continue to have the parliamentary privileges of party leader after ANEL's withdrawal from the government is at least five deputies. Today he has six (seven counting himself), while at the moment two are squarely behind him. Deputy Minister of Defense Maria Kollia-Tsaroucha and Kostas Katsikis.

Kostas Zouraris is in line of voting against the Agreement, so Panos Kammenos is counting on him at first. But Zouraris has said he would vote for confidence in the Tsipras government. If such a matter arises, it is most likely that the chairman of ANEL will vote against a motion of censure by ND as he has suggested. It is characteristic that Maria Kollia-Tsaroucha stated on Monday that she would be the last one to leave ANEL, that she would vote against the Agreement but would not support a motion of censure from ND. Panos Kammenos has not stated after the last conflict with SYRIZA what he will do if there is a vote of confidence.

The chairman of ANEL has already "stricken off" MP Thanasis Papachristopoulos, who has declared that he will vote in favor of the agreement. The MP did a backflop. After he said he would hand over his seat now, he is changing his tune, stressing that he will not deliver it until it is sure that the Tsipras government will not fall. He will be included on SYRIZA ballots.

Deputy Foreign Minister Terence Quick who would get Papachristopoulos' seat if he resigned has excellent relations with the government (so the government would not fall). Mr. Quick has not been invited to ANEL meetings since October. He will also not be present at the meeting on Wednesday, as he will be in Nicosia for bilateral contacts with presidential Commissioner Fotis Photios. The two of them will then depart for Cairo where Quick will also meet with Egyptian Foreign Minister Samej Shuriky.

Tourism Minister Elena Kountoura has not yet clarified to Panos Kammeno what she will do in the vote on the Agreement. SYRIZA sources, however, are counting her amongb their party's forces. She may be a candidate for SYRIZA for the European Parliament or for the First Athens District.

Deputy Minister of Rural Development and ANEL MP Vassilis Kokkalis has also not opened his papers. Government sources say there is already a rapprochement with SYRIZA. This will show if he appears at the ANEL meeting and if he takes a direct position.

Deputy Minister Maria Chrysovelloni, is not an MP but has almost revealed her intentions. She will not accept leaving the government. She even questioned the right of the ANEL president to strikeoff MPs and ministers yesterday. "Ministers and MPs are not objects," she said.

Panos Kammenos has turned his gaze to the pool of independent deputies.

Giorgos Lazarides, who was an ANEL member before becoming independent, is not in discussions with other parties. A heroic stance by the Kammenos, because of the agreement, may pave the way for his return to ANEL.

Nikos Nikolopoulos, who is a person who could be approached by the president of ANEL, seems determined to realize his childhood dream and run for Mayor of Patras.

Katerina Papakosta, although she joined the government with help from Panos Kammenos, seems to be closer to SYRIZA than to ANEL. She does not seem to have the clout to go it alone in the elections with the movement she has created. So SYRIZA is not excluding that it will work with her in the upcoming elections.

Aristides Fokas, who was independent from the Centrist Union, had bridges with ND. However, there have been protests from ND because of the phrase he had said "burn down that brothel, the Parliament". No one knows if Kammenos has approached him.

It is unknown whether Kammeno's plans to approach independent MPs include the former Golden Dawn MP, Dimitris Koukoutsis.

Independent MP Stathis Panagoulis from SYRIZA is in talks with Vasilis Leventis who also has a problem with the losses among his party's MPs. He has not, however, announced his final decisions.

Things are difficult and puzzling for Panos Kammenos. ANEL has suffered a toxic decay and there are not enough people willing to join the party's ranks.