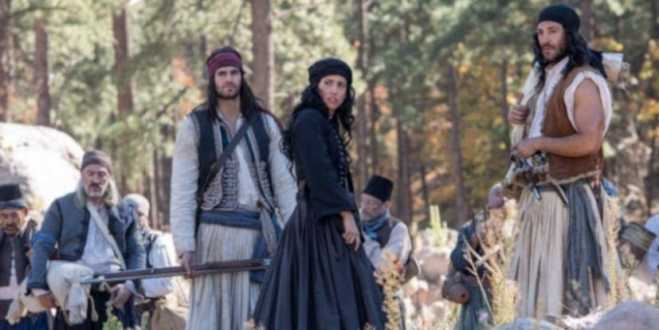 In the rough mountains of Santa Fe, where the shooting of the film "Cliffs of freedom" took place, stunning scenes cameto life straight from the pages of Greek History.

At the initiative of Marianna and Dean Mitropoulos, who took over the production, Hollywood has recently been talking Greek, transferring to the screen the fierce struggle of a people to shirk the yoke and to achievefreedom by passing through blood and fire.

The Revolution of 1821 is now finished. The Hollywood blockbuster will be presented for the first time in front of audience this coming Saturday in London and in March will be screened in cinemas. The film is directed by the famous Chinese filmaker Van Lig who has worked for major productions, such as Titanic and Terminator, in the past.

"The fight for freedom is an international fight," notes the director, explaining that he has worked on the classic melodramas of the cinema. "It is a historical romance that takes place in one of the great, key moments of history. The Greek War of Independence against the Ottoman Empire," Ling says, adding: "The film has to do with freedom: To live a free society, to love whoever you want, to believe what is in your heart, to have the freedom to choose your destiny ... We wanted to make a film in the standards of classical melodramas of the past, although it was difficult to revive epic fighting with the budget of an independent production. "

The 137 minutes of the dramatic film Cliffs of Freedom unleashes the passion of the Greek nation to rid itself of the Turkish conquerors. Behind the war, however, another kind of war defines the destiny of the protagonist, played by actress Tania Raymond.

It is the story of a condemned romantic adventure between a brave young peasant woman and a controversial Turkish officer at the dawn of the Greek War of Independence against the Ottoman Empire in 1821. Twenty-year-old Anna-Christina accepts the arrows of love from Colonel Tariq, a rising star of the Turkish army, who has great doubts about the barbarous methods the Turks use to govern.

He had even saved Anna-Christina's life when she was young and found herself at the edge of a cliff.