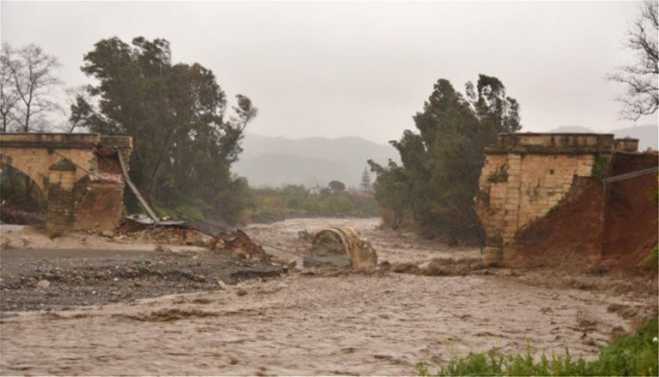 Images in Crete of the aftermath of the weather front “Oceanis” are indicative of the destruction the phenomenon left in its path.
A sheepherder who had gone missing on Monday has still not been located, while the magnitude of the catastrophe was highlighted by the statements made by the Mayor of Platanias, who said: “Even if an outside enemy had bombarded us, I do not think our infrastructure would have sustained so much damage”

At least seven bridges have collapsed in Chania and Rethymno, the prefectures that have suffered the most damage from the torrential rains and gale force winds.

Villages remain blocked, the power grid continues to have problems and with the help of Fire-brigade special units (EMAK) 60 firefighters and dinghies, the coast guard continues its search and rescue operation to locate the 61-year-old shepherd from Apokoronos. The 61-year-old man, a father of five children, went missing at the Embrosneros of the municipality of Apokoronos while he was driving in his car, probably from the rushing torrent.

The provincial road network, especially in Kissamos and Apokoronos in Chania, has collapsed, while all the bridges on it are now out of use as they have either completely collapsed or mostly collapsed.

The images of the crumbling of the Platanias bridge on the old highway on Tuesday are truly shocking.

In the Municipality of Rethymno, authorities proceeded to evacuate the houses located in the area of Platanias, as the level of the Platanias river started to rise and the locals feared it might overflow. A total of 44 people were moved from their homes and were temporarily housed in one of the municipalities’ senior citizen recreation center (KAPI).