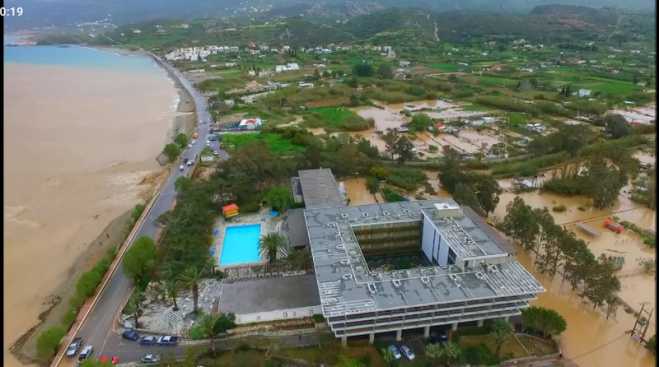 Local inhabitants and authorities are gathering what remains after the dreadful turn of the bad weather, with heavy rains in Sitia.

Residents and Authorities speak of an unprecedented natural disaster, seven hours of uninterrupted rain and a wide range of disasters in the streets, farmers' crops, irrigation and water supply networks, but also homes, hotels, shops, and facilities.

"During the night, lot of water came down, so that three tributaries flowing into the Pantelis River "swelled", which overflowed and flooded a large part of the city," the mayor of Sitia, Theodoros Paterakis said, speaking to cretapost,

Large volumes of water literally overtook almost half the city, "drowning" in the mud property, in particular vehicles and real estate - mainly detached houses, especially those on the ground floor and basements.

As he explained, the most serious problems were found in two large blocks of flats where houses and shops flooded, and human lives were also endangered.

In particular, it was reported that eleven people were trapped by the overflowing river and the high concentration of water it caused in their area.