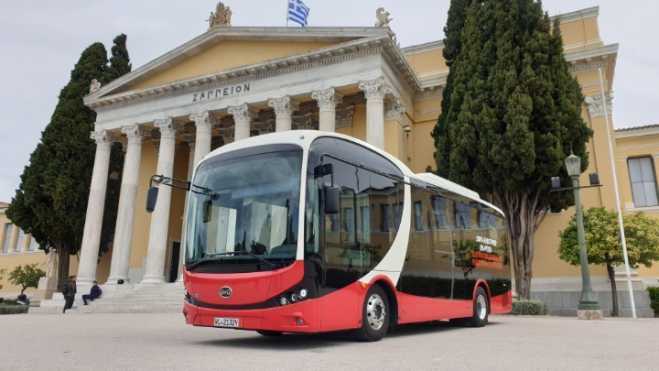 An electric bus was presented for the first time in Athens on Tuesday.

The bus is built by Chinese automobile manufacturer BYD, which is silent having no environmental footprint whatsoever.

Thanos Vourdas, secretary general of the Infrastructure, Transport and Networks Ministry, said that “an electric bus becomes a reality for the first time in Athens… Gradually, we need to introduce electric transport in other urban areas”.

Vourdas added that the ministry is nearing the completion of the agreement regarding the charging bays required for the electric buses.

It has not been announced when the new buses will appear on the streets of the capital.

The BYD bus features an aluminum chassis, 180 KW-power housed electric motors, a 250 BHP engine, and 350 NM of torque available upon ignition. A single two-hour charge can keep it running for 200 kilometers, or 124 miles.

At least 50,000 BYD electric buses have been sold so far internationally, and BYD has already constructed three factories in Europe, on top of the thirty currently in operation in Asia and the US.