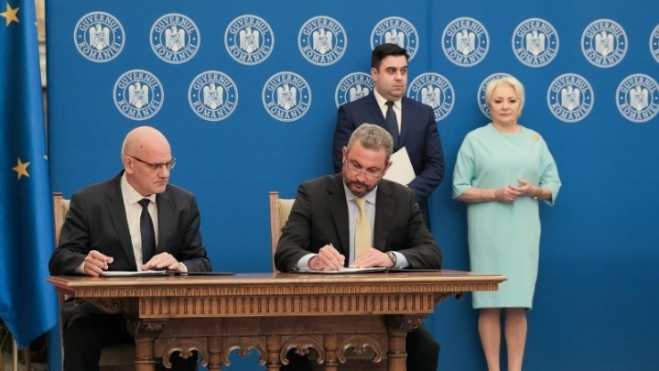 Aktor, a member of Ellaktor Group, on Tuesday announced the signing of contract to build a road project in Romania worth 180 million euros.

The contract was signed in Bucharest on Sunday, April 14, between the CEO of Aktor Alexandros Exarchou and the managing direct of the National Roads Company of Romania (CNAIR), Narcis Neaga, during a ceremony attended by Romanian Prime Minister Viorica Dancila and Transport Minister Alexandru-Razvan Cuc.

The project covers the study and construction of the third section (Lot 3) of the Regional Road of Bucharest, with a length of 18 km. Under the terms of the contract, completion of the project is expected in a period of 42 months.

Aktor is currently executing four large road and railway projects in Romania. In its 17-year presence in the country, Aktor has successfully completed another nine infrastructure projects and seeks to sign contracts for another two projects with a total budget of 1.3 billion euros.

Alexandros Exarchou, commenting on the contract said: "With this project we inaugurate a new era in Aktor's long-term presence in the Balkans and further enhance our presence in Romania, where we enjoy the steady confidence of authorities in implementing infrastructure projects. Aktor has the expertise, specialised human resources and the financial robustness to cope with the most demanding projects, playing a leading role in the development of Southeastern Europe