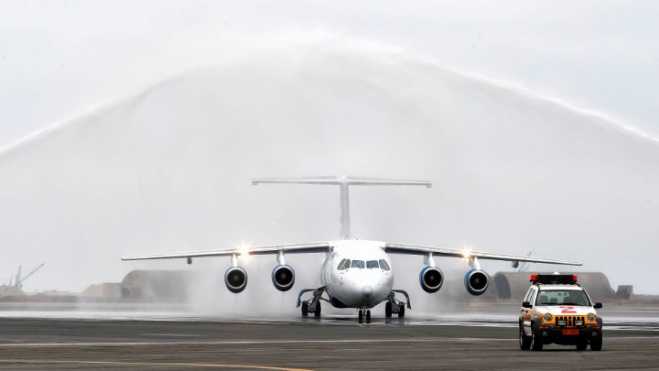 Ellinair on Friday announced its cooperation with Aeroflot Russian Airlines, on the occasion of the fifth anniversary since it started operating, "enhancing its already significant position in the Russian market." Ellinair's CEO Thanos Paschalis made the announcement while speaking at an event held in Athens and co-organised with Athens International Airport "Eleftherios Venizelos".

Five year ago when the first Ellinair flight took off from Thessaloniki airport, it was seen almost as madness by many people, but today the result vindicates our decision," stated the airline's president Ioannis Mouzenidis.Other announcements at the event included the launch of new flight destinations in the summer of 2019, from Athens to the Greek islands of Mykonos, Corfu and Chania on Crete.The airline's cooperation with Aeroflot calls for an Interline Agreement, where both airlines will offer, via their sales network, tickets for their flights and an SPA Agreement, according to which the leader in Russian air transport will use Ellinair to transport its passengers in Greece on the domestic flights Athens-Thessaloniki, Athens-Heraklion, Athens-Rhodes, Athens-Chania, Athens-Santorini, Athens-Corfu and Athens-Mykonos.According to the company's figures, in 2018 Ellinair for the first time exceeded surpassed the limit of 1 million passengers a year.In terms of international flights , the airline will carry out flights to European destinations, such as Stuttgart, Belgrade and Riga, while it will continue the flights from Thessaloniki with cities in Russia, the Ukraine and Kazakhstan, as well as to the capital of Georgia, Tbilisi.