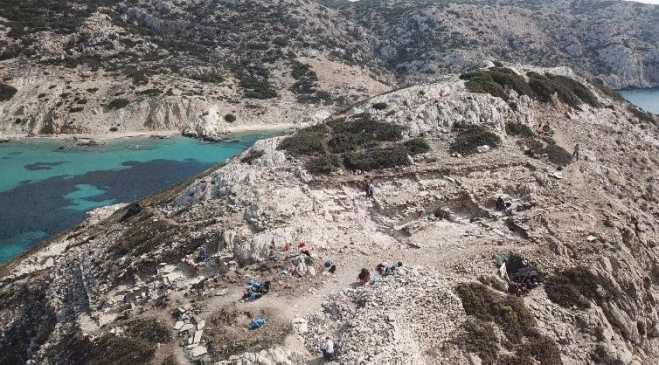 Four-year excavations and research on the extraordinary architectural findings of Kavos on the island of Keros in the Cycladic Islands group confirmed the existence in Early Cycladic times of a complex, stratified and technically expert society, according to ANA.The sanctuary at Kavos on the islet of Keros was a significant regional centre for all the Cycladic Islands, Greece's Ministry of Culture said at the conclusion of the research programme under Cambridge University.

The programme has "revealed impressive architectural remains of a significant Early Cycladic settlement," the ministry noted.Under the project, excavations were carried out on the small islet of Daskalio, originally connected to the nearby site of Kavos on Keros through a narrow strip of land. The date of Early Cycladic was confirmed scientifically, and the remains of the culture at the time include "impressive staircases, drainage pipes and stone buildings that reveal an advanced urban architecture without precedence for the specific period."
This year's results, the ministry pointed out, include paths leading to the top of the settlement, passing by terraces created to support buildings. "The complicated, interlinked and multi-level architecture shows the existence of a well-organised and well-built settlement on a steep promontory," it added.