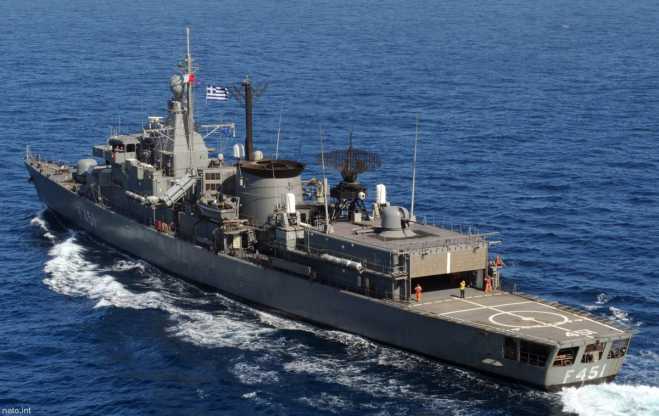 The General Staff of the Hellenic Navy announced that on Thursday, 2 May 2019, the Contract for the Supply and Installation of Four (4) Generator Pairs was signed in Geneva in the framework of the replacement of generators for S-type frigates under the name “KYKNOS” . Te generators are manufactured by “SOCIETE INTERNATIONALE DES MOTEURS BAUDOUIN” and “LEROY SOMER”.

The contract was signed by Chief of Staff Vice-Admiral Nikolaos Tsounis, the Vice President of “BAUDOUIN” Mr. Emmanuel Tellier, shipowner and member of the Social Beneficent Society of Greek Shipowners SYN-ENOSIS (Civil Non Profit Company) Mr. Panagiotis Laskaridis, the Vice President of the company “BAUDOUIN” Emmanuel Tellier-L’Hernault, as supplier, and the General Manager of the company “NEW HELLENIC SHIPPING SA” Mr. Apostolos Dassios, as installer, while the Minister of National Defense Mr. Evangelos Apostolakis and the Chief of the General Staff Christos Christodoulou attended.

In the context of the implementation of the contract, BAUDOUIN undertakes to provide four power generators for installation in an “S” frigate, including the supply of spare parts, tools, and support. These generators will be installed by the company “NEW GREEK SHIPPING SA”, which undertakes the obligation to install and execute the necessary piping and electrical works of interconnection and operation.

The entire cost of supply and installation will be covered by Mr. Panagiotis Laskaridis. The project is scheduled to be completed within eleven (11) months of signing the Contract (delivery of generating sets – installation – testing).