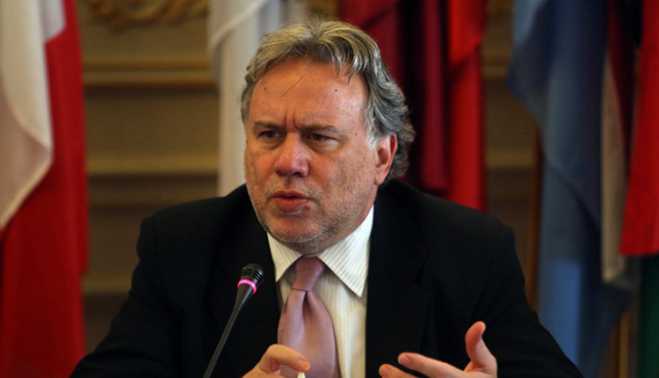 The European Union should keep its doors open to Turkey despite the country's descent into authoritarianism and its decision to drill for gas in the East Mediterranean off Cyprus, Greece's Foreign Minister Georgios Katrougalos told U.S. news site Politico.

The foreign minister stressed that Greece is among the few countries in Europe which still believes in Turkey’s long-stalled accession bid to join the 28-member bloc, adding however that Ankara must “not just international law but also the rule of law and human rights.”

There is large consensus in the EU that Turkey, whose accession into the bloc formally began in 2005, has failed to comply with any of the required criteria pertaining to candidacy. The European Parliament, in a non-binding vote on March 13, 2019, called for the suspension of EU accession talks with Turkey, citing violations of human rights and the rule of law.

While the country’s accession was a contentious issue for the EU's member states from the beginning, the efforts of President Recep Tayyip Erdoğan to consolidate his power and dismantling Turkey's fragile democracy have worked to solidify the stance of member states, Politico said.

France has been an outspoken opponent of Turkey’s membership and Austria has said accession talks with the country must end “immediately.”

Manfred Weber, lead candidate for Commission president of the centre-right European People's Party (EPP), expected to remain the European Parliament's largest bloc in this month's European election, has repeatedly said if he becomes Commission president, he will instruct the offices in Brussels to end the talks with Turkey on accession, the article recalled.

Despite the fact that of 35 accession chapters, only one has been completed so far and many have not even been opened, ending Turkey’s EU bid is not easy, Politico pointed out.

It would require the unanimous approval of all EU member states and not all states support ending Turkey’s EU bid. Greece, Bulgaria and Cyprus, support the EU dream of their neighbour Turkey, Politico said, pending Ankara’s fulfilment of all the necessary conditions to join.

Turkey’s plans to start exploratory drilling for oil and gas off the divided island of Cyprus amid an ongoing dispute with Greece and Cyprus over the island's exclusive economic zone, has prompted an outcry from Brussels as well as Washington

Katrougalos maintains Turkey’s move stems from its feeling of isolation in the region.

“They feel isolated, but the fact of isolation is the result of their own choices, not of ours, we want to have very good relations with Turkey ... but based on international law,” Katrougalos told Politico.

Turkey, the only country to recognise the breakaway Turkish Republic of Northern Cyprus, doesn’t have diplomatic relations with the internationally recognised government of Greek Cyprus and claims that part of the Cyprus offshore area remains under the jurisdiction of Turkish Cypriots or Turkey.