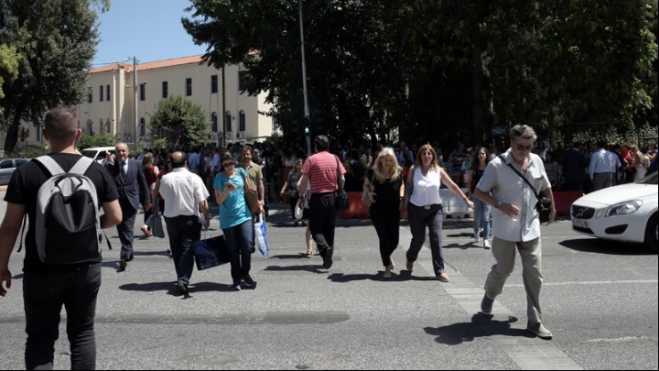 "There is no cause for concern from further earthquakes," but the state's emergency infrastructure will remain on the alert for 48 hours, said Nikos Chardalias, Civil Protection secretary general, on Friday evening shortly after the meeting of the Civil Protection Central Coordination Body.

The agency convened at the Fire Brigade's Operations Coordinating Center in the Athens district of Halandri.

The Secretary General said that Civil Protection activated all the municipal emergency services to the citizens' assistance, and said that in terms of injuries one lightly injured tourist was taken to hospital and other civilians sustained minor injuries.

In buildings, plaster fell off the facade of some old buildings in Athens, he added, and some minor structural damages were recorded, mostly near the earthquake's epicenter at Magoula.

There was also some concern that the collapsed conveyor belt at the port of Piraeus might have trapped someone underneath, but a portable scanner and trained dogs showed that there was no one there, he added.

On telecommunication problems observed right after the tremor, Chardalias reported that brief interruptions were noted on cellphone antennas but service was restored.

"The city has withstood (the quake) and will withstand more," he said, adding that two Fire Brigade helicopters will continue to patrol the area around the earthquake's epicenter, to observe at high elevations things not easily visible, as part of Civil Protection protocol.

"It is a time we have to continue to be on alert and look at the issues of immediate restoration," so as to be able to respond fast to any such natural phenomenon.

He concluded that if necessary civil servants' summer leaves will be revoked, in order to avoid the slightest problem in the operation of the state apparatus, but pointed out that so far this has not been needed.He also informed that the Earthquake Planning and Protection Organization (OASP) will convene at 22:00 on Friday to evaluate the development of seismic activity.

In addition, Prime Minister Kyriakos Mitsotakis is also scheduled to visit the Operations Coordinating Center in Halandri at 21:00 on Friday. The center convened shortly after the earthquake to brief state agencies and coordinate activity.