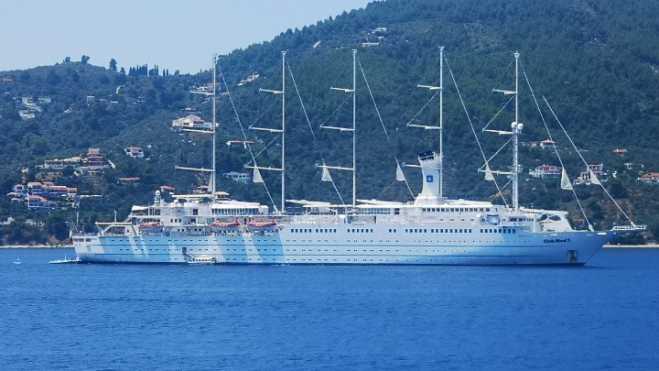 The sailing boat and cruise ship "Club Med 2" arrived in the port of Volos on Monday carrying hundreds of French-speaking tourists (French, Swiss and Belgian) who will visit the city and its archaeological sites as well as nearby villages of Pelion.

It combines the power of seven computer-operated sails with more traditional diesel-electric power, having four diesel generators that power two electric motors. It can carry up to 386 passengers.

It arrived in Volos on Monday with 303 passengers and 219 crew members on board, having set sail from the island of Skiathos, where it spent the previous day, with its passengers going ashore to the famous Koukounaries beach and other sights in speedboats. Locals speaking to the Athens-Macedonian News Agency underlined the need for the island to finally acquire port infrastructure capable of receiving larger ships and a marina.

The cruise ship's next stop after Volos will be the port of Thessaloniki.