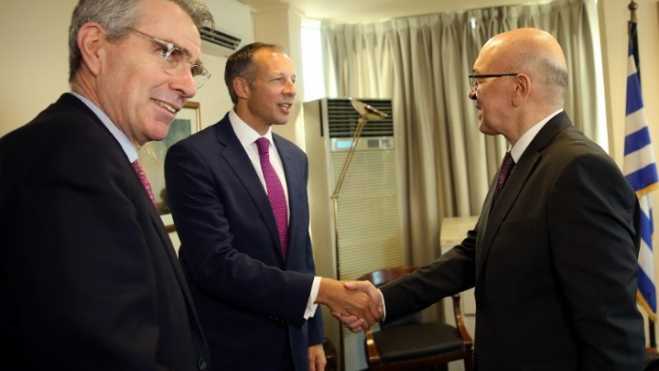 Deputy Foreign Minister for Economic Diplomacy and Openness Kostas Fragogiannis on Tuesday met with United States Assistant Secretary of State for Energy, Francis Fannon, whereupon the commitment of Greece and the US to further deepen their close bilateral co-operation in the energy sector was reaffirmed.

In the presence of US Ambassador to Greece Geoffrey Pyatt, it was underlined how important is "Europe's efforts to diversify its energy sources to promote regional energy security."

Greece's role as a regional hub in the supply of natural gas was also discussed, as were the prospects for US private investment in the Greek energy sector and the expansion of cooperation on renewable energy. To this end, it was noted that both sides have committed themselves to ensuring transparency and sound competition in order to further encourage investment in Greece.

Fannon congratulated Greece on the forthcoming completion of the Greek section of the Trans Adriatic Pipeline (TAP), on the ongoing construction work at the Gas Interconnector Greece-Bulgaria, as well as on planning to improve energy interconnections with the Republic of North Macedonia.

In this context, the Greek and US delegations reaffirmed their support for diversifying export options for commercially viable eastern Mediterranean energy sources, and for enhancing regional energy security, which could include new infrastructure projects such as the East Med Pipeline and the FSRU station in the northern Greek city of Alexandroupolis.

Finally, the role that US-liquefied natural gas (LNG) can play in achieving the goals of diversifying energy sources in Greece and the wider region was also discussed.