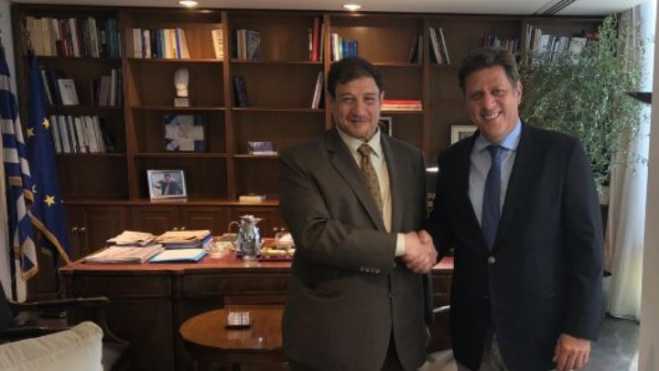 Alternate Foreign Affairs Minister Miltiadis Varvitsiotis on Tuesday met with Ambassador of Kuwait to Greece Saud Faisal Al-Daweesh, with whom he discussed closer cooperation between the two countries, emphasizing investment prospects and tourism.

The meeting reaffirmed the standing excellent bilateral relations and the expectation that the forthcoming 4th EU-Arab World Summit 'A Strategic Partnership', to be held in Athens in October, as well as the next meeting of the Joint Ministerial Committee in Kuwait, will help to further deepen relations between the two countries.

Varvitsiotis said the political and economic stability in Greece, as well as the imminent removal of capital controls, make the country an attractive destination for new investments.

In the same context, he referred to the successful paradigm of Kuwait's investment in the Four Seasons Astir Palace Hotel in Athens and outlined the prospects of investing in the Hellinikon Project, as the licensing process is expected to be finalized by year's end.

A special mention was made on the large number of Kuwaiti citizens who visit Greece every year.

The Kuwaiti ambassador reportedly acknowledged the improved investments climate in Greece, which, in combination with the soon-to-launch direct air link between the two counties, "will make Greece an even more popular destination for Kuwaiti investors and citizens."

The 4th EU-Arab World Summit 'A Strategic Partnership' will be held on October 29-30, 2019, at Megaron-The Athens Concert Hall.