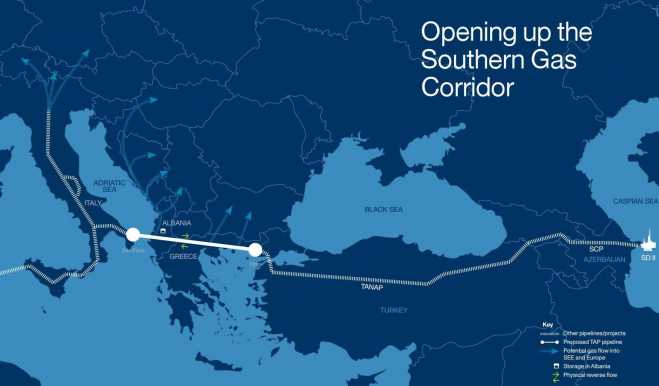 The scenario of the two gas pipelines – TAP and Turkish Stream- which are expected to cross the Balkans in the near future, interconnecting is, according to the expert from the Russian company Sperbank, Andrei Gromadin, a possibility Moscow could consider in the future.

However, these are two projects with a completely different “geopolitical” mentality…

As the expert himself points out, and as the Russian media report, according to the existing planning, the Turkish Stream pipeline is expected to supply gas to Turkey and to a part of the Balkans, namely Bulgaria, Serbia and Hungary.

“The possibility of collaborating with other infrastructure projects, such as the TAP pipeline, is not foreseen at the moment, but our take on this is that it may be possible in the future, provided that the demand for natural gas in the markets targeted by the Turkish Stream pipeline is lower than projected”, he notes, referring to the likelihood of demand falling in Western European countries, as “it is in any case Germany and Austria the countries on which the Russian Gazprom is based”.

The consortium that manages the TAP pipeline, as reported, is currently examining the interest of countries and prospective buyers, in order to determine the quantities of gas it will be required to transport, once TAP is put into operation.

The Turkish Stream pipeline’s construction process appears to be moving forward undisturbed, as the first section of the 403 km long project within Serbia has been completed.

The division extends from the Bulgarian border all the way to the Serbian town of Cuprija.

At the same time, construction work continues at the second section reaching the Danube River.

According to the existing planning, all four parts of the project are planned to be completed by the end of the year, comprising a 900-million-dollar investment by the Russian company Gazprom.