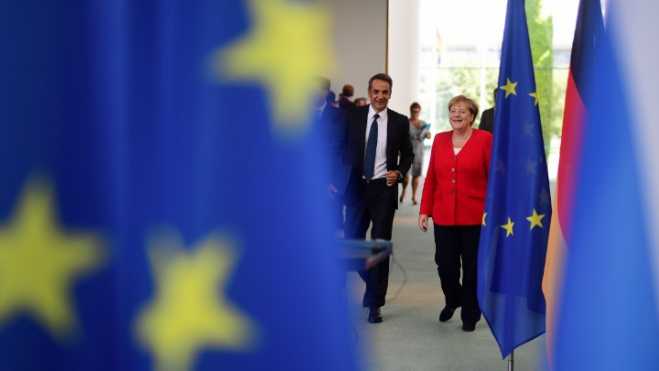 Greek Prime Minister Kyriakos Mitsotakis committed to deep structural reforms in Greece that will extend further than those implemented during the years of the economic crisis, he said at a press conference with German Chancellor Angela Merkel in Berlin on Thursday.

"Changes in the economy will be made by us because they concern us," Mitsotakis said, adding however that "we want Germany's help." He announced an extensive and joint investment program between Greece and Germany, calling it "an ambitious investment plan related to energy, green technology, renewable energy sources and waste management" that addresses concerns over climate change.

At the same time, he said, the two countries had outlined a roadmap of economic cooperation. "I want to change the framework of Greek-German relations,"  Mitsotakis stressed, adding: "We are preparing with Germany a green development plan which we will present with the Chancellor in December."

He emphasised that related to the plan are the dramatic moves to restructure the Public Power Corporation (PPC), the country's electricity utility, and that sustainable development will be discussed at an open conference in January.

Mitsotakis that Greece wants German investment and to change the narrative about the country as it is "no longer a problematic country."

Replying to a press question about primary surplus target obligations to its creditors, the Greek premier said, "I have already said that primary suprluses are high, but that Greece will meet the targets," he said, referring to the targets for 2019 and 2020. He said these issues concern the institutions and will be discussed with the institutions, adding, "We will first gain political credibility as a reform government, and then we will discuss primary surpluses related to Greece's debt."

However, he added, the higher the rate of growth, the easier it will be to handle debt.

The Greek prime minister added that they had also discussed the refugee issue. He underlined that Greece will do everything in its power to return refugees to Turkey so that those who remain in Greece can enjoy good living conditions. He reiterated however that Greece's borders are also Europe's borders, and solidarity by EU countries is necessary.

"If we want free movement of people and the Schengen Treaty, Europe must show solidarity. There cannot be countries benefitted by Schengen that don't participate in the distribution of refugees." He also announced that the policies of granting asylum in Greece will change within the following months.

"We spoke about Turkey and the Cyprus issue, and both Athens and Berlin agree that Turkey's actions in the Cyprus EEZ are illegal," he noted.

In addition, Mitsotakis reiterated his disagreement with the Prespes Agreement, which he said had serious flaws that could however be modified by North Macedonia's EU accession process.

Asked to comment on German reparations for WWII Greece is requesting, he said the issue is difficult and sensitive. His government wants the issue to be resolved and that the previous government had filed a demarche with Germany inviting it to related negotiations. "We are awaiting a response and believe that the resolution will contribute to the further improvement of relations between the two countiries," the premier said.

Wrapping up, PM Mitsotakis referred to New Democracy's (ND) victory in the recent general elections and said that the results showed that Greece has opted for economic growth and condemned populism, "proving the maturity of the Greek people."

Mitsotakis delivered the closing phrases in German, thanking Merkel and the German people for showing understanding for the Greek people, inviting Merkel to visit Greece.

Chancellor Merkel: Sentiment and dynamics in Greece have improved

"The new Greek government has worked very hard during the summer and has already moved forward on some things," German Chancellor Angela Merkel said at a joint press conference, welcoming visiting Prime Minister  Mitsotakis, "something that I believe has improved the sentiment and dynamics in Greece."

Merkel said that the two leaders "shared many views" and noted that the government has begun implementing the reforms it presented during the electoral campaign.

In addition, she said, the new Greek government will implement the privatization agenda must faster, meaning that German businesses will have new opportunities to invest. "This is surely something that German entrepreneurship will gladly take avantage of," she said. "The current economic reform agenda will make it easier for Greece to meet its outstanding obligations in the framework of support programs," she added, noting the important role of positive business sentiment.

In terms of migration, Merkel reiterated that both countries support the EU-Turkey agreement and she expressed her satisfaction for the fact that the new government was focusing on adding substance to this agreement. "We have already lost a lot of time, and the actual mechanism of this agreement has not been put in action," she noted.

Chancellor Merkel also referred to collaboration between Germany and Greece in the EU context. "We spoke of issues of enlargement - that is, the accession negotiations for Serbia and Montenegro and the future of accession negotiations for North Macedonia and Albania." She added that "there will be a series of joint aspects in our bilateral relations which we will work on further and implement."