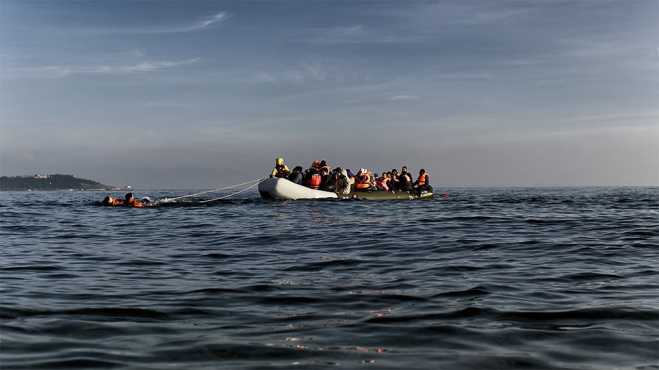 "On Friday, hundreds of refugees arrived within an hour on the Greek island," writes the German daily Bild, paintin a dark picture of the situation in Lesvos.

"Dramatic scenes unfold in Lesvos ... the Coast Guard has counted 13 small vessels carrying 546 people. Thirty-two people on another boat were rescued at sea and transported to Lesvos. Sixty-five people have been moved to the island of Kos and inland," the report reads, adding: "The Greek authorities have spoken of "a significant increase in the number of refugees and migrants" leaving the Turkish coast. This has been happening since 2016. "

"The Greeks sent a navy ship to Lesvos, which had to take five thousand men inland because there was no space in the camps." And, as the German newspaper Bild reports, "old military installations will be used as refugee camps."

"Greece has come into contact with the European Union on the increasingly difficult management of refugee flow and informed the Turkish ambassador about it," diplomats said, according to Bild. The German newspaper also wonders if the new refugee flow is a game of power on the Turkish side.

Speaking to the Bild newspaper, a senior Greek government official commented on the arrival of new refugees in Lesvos: “We are watching the issue very closely. Before deciding what to do next, we need to see if yesterday's streams were an isolated case or not. One thing is certain: these currents did not come due to good weather. They come for geopolitical reasons.

Therefore, Erdogan is likely to want to use refugees to exert pressure on the European Union. "