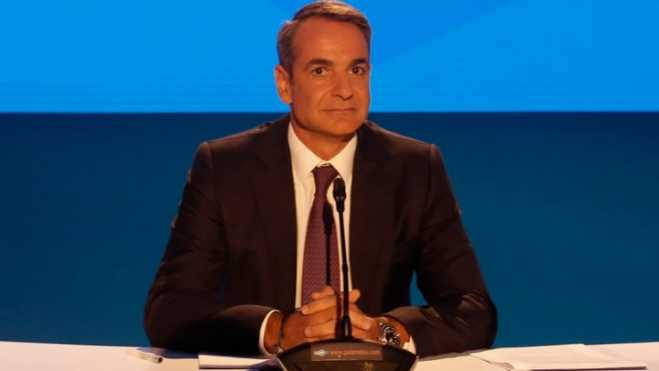 Greece will be the pleasant surprise of the Eurozone, Prime Minister Kyriakos Mitsotakis said on Sunday during the PM's press conference at the 84th Thessaloniki International Fair (TIF), when asked if the economy will be affected by an emerging global recession.

He said that Greece will achieve its target for high growth rates and said that he did not agree with the more pessimistic forecasts concerning the global economy.
Mitsotakis noted that the situation inherited by his government in the economy was not all that good, adding that it would be possible to implement its policies because of an overperformance in revenues during the last two months. This shows that something has changed, he added.
He clarified that the government's economic policy did not undermine fiscal discipline and was not focused only on tax cuts but also strong growth through a wave of foreign and domestic investments that will create jobs.
Asked to clarify his statement on Saturday regarding voting, Mitsotakis noted that he was not giving expatriate Greeks any additional rights nor enlarging the electorate.
"We are simply facilitating those that are already registered on an electoral roll to be able to vote in their place of residence. We are also examining the possibility of a postal vote," he said.
He said a revision of the constitution will be completed before the end of the year, noting that this would be "of limited scope" though the government was not responsible for this.
On election law, Mitsotakis said that he did not wish to link issues relating to election law with the changes to the Constitution, noting that these were "two separate items". He repeated that simple proportional representation was "disastrous" and that he would therefore propose a law that would ensure governability.
"A party with 40 pct has a right to govern," he said.
The prime minister confirmed that he intends to have a first meeting with Turkish President Recep Tayyip Erdogan on the sidelines of the United Nations assembly.
"If Mr. Erdogan would like to truly restart Greek-Turkish relations then he must prove this in practice," Mitsotakis said, adding that his own intention was to engage in talks "because this is the only way to find mutually acceptable solutions. We come to the negotiation with the arguments provided to us by international law, which is on our side."
Regarding Turkey's actions in the Cypriot Exclusive Economic Zone (EEZ), Mitsotakis said that he had raise the issue at all his international meetings, adding that it was a European issue.
The migration issue was also a European matter, Mitsotakis emphasised, noting that Turkey had been given a great deal of money, almost six billion euros, to assist in managing migration flows.

Mitsotakis: We will reduce primary surplus targets, the arguments are on our side

The government will push for a decrease of primary surplus targets but not immediately, only once Greece acquires political credibility, Prime Minister Kyriakos Mitsotakis said during his press conference at the Thessaloniki International Fair (TIF) on Sunday.
Asked to respond to criticism voiced by main opposition SYRIZA over the negotiation on reducing primary surplus targets, Mitsotakis said he was being absolutely consistent with everything he had said before the elections on this matter.
"This does not mean that I don't put this on the table during talks and explain why the surpluses are outdated," he added. High growth rates made the debt automatically more sustainable, Mitsotakis noted. "We have all the arguments for the reduction of primary surpluses on our side and we will do it," the prime minister said.
On the tax cuts that he announced on Saturday, the prime minister said that all the measures announced for 2020 were costed and realistic and that Greece will not be taking its EU partners by surprise.
"I would not proceed to make announcements unless the measures were fully costed," he said.
Regarding the Public Power Corporation (PPC) and the government plan for returning it to health, Mitsotakis said that the company's liquidity needs to restored and some parts of it sold off.
"I want PPC to be a front runner in a liberalised energy market that uses renewable energy sources. We will make it profitable once more. We cannot exercise social policy via the PPC, it must be paid," he said.

Greece to place request to pay off IMF loans at Eurogroup on Friday, PM says

The government intends to pay off the expensive International Monetary Fund (IMF) loans early and the finance minister will make the relevant request at the Eurogroup on Friday, Mitsotakis announced during the press conference at the Thessaloniki International Fair (TIF) on Sunday.
"We will save approximately 75 million euros a year from this action alone," he said, noting that lower interest rates facilate the government's policy and allow Greece to borrow at better rates.

Elaborating on his announcements concerning taxes during the press conference on Sunday,Mitsotakis noted that a reduction of taxes increases the general obligation for tax compliance.
The reduction of the entry-level tax rate for freelance workers will give them an additional income to declare their income, he said.
By 2021, he added, there will be sufficient fiscal space to reduce the solidarity contribution and the enterprise tax.
The prime minister announced that draft bill on agricultural cooperatives will be tabled within the month, noting the government's intention to crack down "mercilessly" on illegal "hellenisation" of foreign goods.
He also said that citizens should be aware that, if there was an overperformance in terms of collecting public revenue, "we can always intervene and return this to citizens via tax cuts and support for the social state."
Mitsotakis went on to assure pensioners that the government will respect court decisions for backdated pension increases: "We will examine the fiscal margins and carry out the returns over the course of time," he said.
He also promised that no benefits will be cut and promised a "concerted approach" to issues concerning people with disabilities, saying that he had undertaken this personally and that the government will present innovative proposals in this area.
On labour issues, he said the government's goal was to "support the people of labour and full employment and to oppose all forms of employer abuse." He repeated that a reduction of social insurance contributions will begin on July 1, 2020 and his faith in free collective labour bargaining.

Prespes Agreement 'nationally damaging but can't be changed at will,' PM says

Mitsotakis criticised the Prespes Agreement signed with North Macedonia, saying that it was "nationally damaging," but noted that it has been ratified and cannot be changed at will.
"I pointed this out when I spoke in Parliament before the elections. The agreement makes no provision for any process to change it, only to monitor its implementation and on this we shall be very strict," he said.
He referred to the need to support Greek Macedonian products and the Macedonian brand and to "win the communications game" abroad, so that people hearing the word 'Macedonia' will think of Greek Macedonia.
No meeting with North Macedonia's prime minister, Zoran Zaev, has been arranged at this time but such a meeting will at some point take place, Mitsotakis added.